End before sunrise start schedule at 4:30 PM ? WHY

The other 7 zones share a schedule, and it runs them as needed. This is set to finish before sunrise.

The issue I am having is that all of a sudden last week it started running the lawn and flowerbeds at around 4:30 PM most afternoons.
Today is a great example. The vegetable garden is set to run with a total water time of 45 minutes with really slow flow water heads. They soak at least 30 minutes between. Total run time would be under 2 hours.
Then for the other schedule, only 1 lawn is set to run for a total of 1hr 15 min, with a total of 2hr 30 min soak time. So a total of 3hr 45 min.

Between the two it would have a max time of 6 hours, which could easily start after dark in both cases, and still be done before sunrise. But instead it ran the front lawn at 4:30 PM and will finish before sunset, rather than finishing before sunrise.

If they combined the cycle soaks, the entire thing could have been run for 4hrs 30 min or so, and it’s dark for a lot longer than that.

Anyone know why this is?

You mentioned 7 zones in addition to the vegetable garden. And that they are all on a single schedule. Can you tell what the run times are on each of the zones?

So 8 zones total, 2 schedules.
7 zones on a single schedule called flowers and lawn.
That schedule is a flex daily with smart cycle for the cycle soak.

The run times and soak times are added up as typing x min run then y soak, then X run, then y soak seems unnecessary and a bit daunting, plus the auto cycle soak takes care of that pert.
The cycle soak is not really that important to the question though I don’t think

The main question is.
Why is there a schedule that has 7 zones, setup as flex daily with the recommended cycle soak, and set to end before sunrise, but it starts at 4:30 pm

In the example, the flex daily only needed to run zone 1, as zones 2-7 didn’t need to be watered today.
And the vegetable schedule also needed to run.
So between the 2 schedules, only 2 zones were needed.

In the example, the flex daily only needed to run zone 1, as zones 2-7 didn’t need to be watered today.
And the vegetable schedule also needed to run.
So between the 2 schedules, only 2 zones were needed.

The End By feature is not as smart as it could/should be. It will always start at the time necessary to complete watering of ALL the zones in the schedule by the selected time. Even if only one of them is running.

I’m guessing that’s the case with your system, that the total watering time of all 7 zones together is roughly 15.5 hours (8 am + 12 hrs - 4.5 pm = 15.5 hours). Any manual soak times would certainly increase this, but auto soak ought to be able to place them in between watering of other zones. While it seems stupid that it starts then all the time (and is), the fact that SOME time it WILL start then, when all zones need watering the same day, which is quite common, as heavy rains will put the zones in sync. And as permission to start at that early time is given once, it then occurs at that time all the time.

Unless the End By 8 am is a hard and fast rule that cannot be broken, I’d use a Start time instead that seems reasonable, even though it may extend watering past 8 am.

Thanks, I’ll look at adjusting that.

@ any admin.
This seems like a feature update. When the system figures out which zones should start, it should always factor them together to let soak times overlap with other zones running, then should calculate the total time, and start as late as possible to end before sunrise.

This starting at 4:30 in the hottest part of the afternoon is both a waste of water, and ruins any plans of yard work when I get off work.

I would be surprised if it took 15 hours to water the entire thing BTW. Though I totally see your logic.
The total run time for all 7 zones is 7 hrs 23 min. With the Cycle soak being able to fit between other Zone runs my total time should be closer to a total of 8 -9 hours, if the final few zones have to soak a little between runs.

I totally agree with all that. But you mentioned above about a 1:15 watering time and a 2:30 soak time, which does NOT sound like auto soak, and could extend times a great deal. Maybe check the total watering time on the zone, then try turning off the soak feature and see what your total time is.

Then see that tomorrow it’s set to start at 4:39 PM and end before the Veg Garden runs, rather than starting after the Veg garden ends and running at a more optimal time. 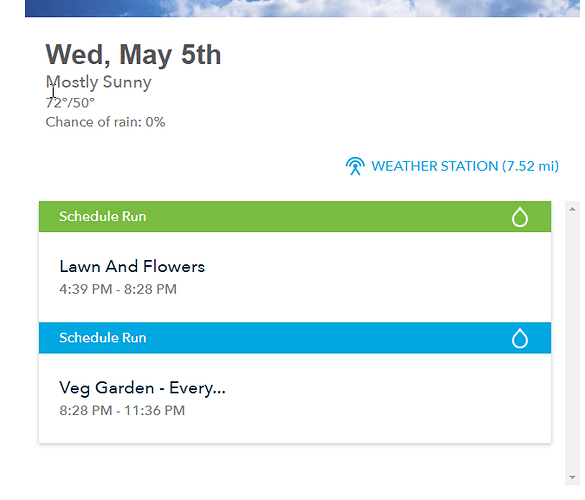 Then see that tomorrow it’s set to start at 4:39 PM and end before the Veg Garden runs, rather than starting after the Veg garden ends and running at a more optimal time.

That helps a lot, thanks. What time is your Veg Garden set to start or end? If it’s 8:28pm start, running to 11:36pm, then there may not be enough time after that to run the full Lawn and Flowers schedule and still end before sunrise (I’d mistakenly used End by 8 AM above, rather than End by Sunrise). If the Garden ends at 11:36, then adding 7.38 hours gives us close to 7 AM. And there may be soak times that increase that 7.38 hours.

I’m assuming that the Garden zone is a drip irrigation system, due to the over 3 hours run time. If that’s the case, and especially if you have mulch in the area, you can water during the day without losing that much water due to evaporation. You might try setting the Garden zone to Start at 6-7 AM, which I believe should start it after the Lawn zones, even if all of them are running.

Thanks!
The Vegetable garden is set to start after sunset.
Sadly no rocks or bark as it’s a huge 20x35 foot garden that gets tilled with some compost mixed in every year.

I realized I had it set to run 45 minutes total water time, but set to run 15 min then soak 30 min between. I changed it to auto cycle soak, and POOF, it still starts at the same time, but the lawn and flowers moved to an 11 PM.

So you may be right. 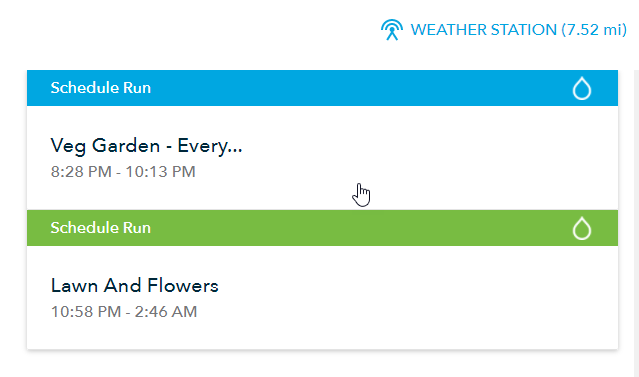 That sounds like a step in the right direction. If you’d like to water your lawn closer to morning, you might set the End By time to 8 AM or even a bit later. Only when watering all 7 stations will it use all the time and end at 8, and you’ll be watering less in the middle of the night.

I personally don’t like to water at night; it promotes mildew and other problems. Sources generally agree that you should finish watering by about 10 AM, as a compromise between healthy grown and water loss due to evaporation. But I realize that many prefer watering at night; they don’t seem to have problems and want to preserve every drop of water they can. So that’s your choice.

@ any admin.
This seems like a feature update. When the system figures out which zones should start, it should always factor them together to let soak times overlap with other zones running, then should calculate the total time, and start as late as possible to end before sunrise.

It has been beaten to death in many threads. I’m sure Rachio has some valid reason why they haven’t (or haven’t been able to) implement this, but I have no idea what it is. I’m sure their reason isn’t just to torment us.

I know you and @rraisley have a lot worked out already, but what type of nozzles are you running? Do you think the cycle soak needed? Could you break the schedule out into a couple different flex schedules? That’s partly how I got around this issue…I broke my front and back yards up into two schedules.

Having 2 schedules (3 for me if you include Veg Garden) seemed to make it even more difficult to get the schedules to coordinate.

Unfortunately it’s not the nozzle type, as I have the super super slow MP Rotators that put a very slow amount of water per house, but with a slope (fairly steep in front, and moderate in back) in my yard, and also an extremely hard and compact clay soil, having a cycle soak is very important.

. Sources generally agree that you should finish watering by about 10 AM, as a compromise between healthy grown and water loss due to evaporation.

I think I will try this change and see how it goes.
I’m OK to water in the mornings, when it’s still cool and before the heat sucks away all the water. I just don’t like watering from 2:00PM to about 8:30PM when it’s the hottest part of the day.

Most of the time winds are at their lowest in the mornings as well, so it’s also better for more even coverage that way.

Thanks for all your help.

I LOVE MP Rotators. I switched my whole property to those, and that is also why I was able to reduce the total run time. The low flow allowed me to combine multiple like zones together. I went from 14 grass zones spread across 2 Rachio’s to 6 grass zones, and if the Rachio’s were physically close enough, I’d be able to rewire and reduce to 1 unit for the whole property.

With the incredibly low .55"-ish PR of the MP’s, are you positive that you need cycle soak? My yard is completely flat, but compacted soil, so I don’t know how much runoff is possible, even with the MP’s.

With the slope and clay, if I turn it off I get a flow over my sidewalk and into the front strip and gutter. With the cycle soak, I don’t see any runoff.

It’s a pretty brutal clay, think hitting it with a pick axe as hard as you can can only getting about 2 inches down at best.

I think if I didn’t have the slope I could easily get away with no cycle soak.

The nice things is if it runs 4 zones from the same schedule same night, the auto cycle soak uses the time on the next zones so it doesn’t actually waste any time when it does that.

I should mention, I have approximately 0.4 acres, and the smallest house in the neighborhood, but one of the biggest yards. I installed the sprinklers with the main line being 2 inches, and between that and the MP Rota tors, I am able to have 5 grass zones and 2 flower zones all sharing 1 schedule.
3 of the zones take up over ,8,000 square feet of grass just in those 3 zones.

I’m spread out on 2 acres, but only about 12,000sw ft of grass. Each MP zone now has about 15-18 sprinklers per zone, and I think they actually work BETTER than they did prior because adding all the zones together brought my water pressure to the head into the sweet spot at 40-44 psi.

Sadly this is absolutely correct. I tried a few years ago to get @franz to review this poor logic but he didn’t bite.

I tried a few years ago to get @franz to review this poor logic but he didn’t bite.

I don’t think it that @franz didn’t bite…I can almost guarantee that Rachio hears the complaints about this. There has to be some reason in the programing that has made it difficult to implement this change. What that reason is, I have no clue. I know nothing about programing in general, and those on here that do know programing, don’t know RACHIO’s programming.