Where is the solenoid valve for the sprinkler zone?

We moved to the new house recently. We have a 9-zones system (1-9) but only 4 solenoid valves seen in the valve box. The wires (9 zone wires + C and P wires) from the Rachio controller go only to this one box but 5 wires are not connected to anything in the solenoid box. Right now, zone 1 is not working but the rest 8 zones working fine. I’m confused by which valve controls zone 1? Is there another valve box near the house, or zone 1 is not an active zone from the first place?

Any insights are welcomed. Thanks in advance. 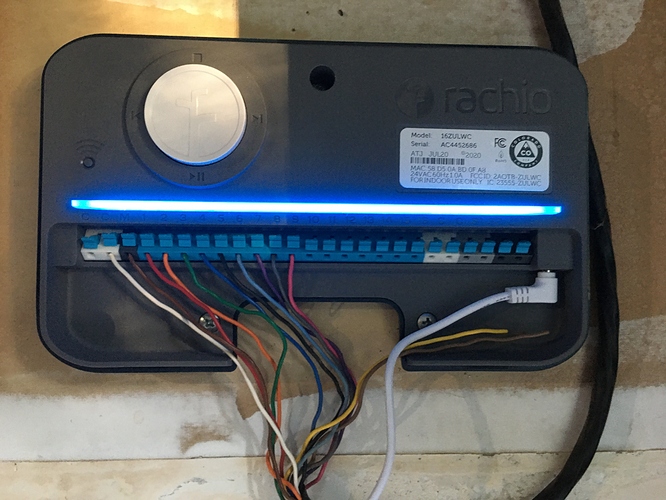 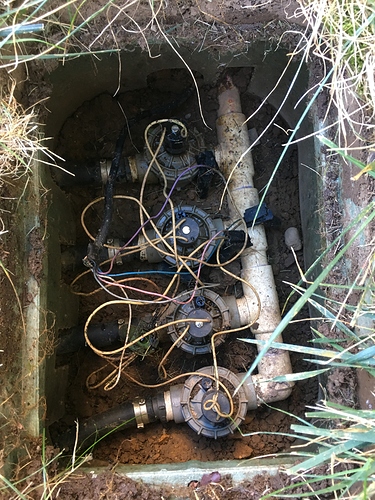 Are you saying that you have eight distinct zones currently working? If so, it seems like you have to have another box somewhere. You should be able to manually turn on each of the valve you know about to see which zone they are (well, the colors should be matching up too.

From the colors, it looks like you’ve found the box at the end of the run (zones 6 through 9).

Try following the path of the white pipe, if you find anything inline with it.

Thanks, Thomas. I thought there should be another box because of only 4 valves and the disconnected wires in the valve box, but I don’t see the black cable from Rachio Controller going anywhere else. The valves in the box don’t look like split ones either. That’s why I’m confused.

Thanks, Gene. The black cable from Rachio controller goes to this valve box only. I also bought a valve locator (cheaper one from Amazon) but didn’t hear any signal around the house.

It does sound confusing. Do you currently have eight distinct zones working when you turn on zones through the controller? Have you tried manually turning on valves? I am curious if the colors and manually turning on zones match up with the last four zones as Gene has mentioned . . . it might make sense since it appears the pipe dead ends.

Yes, all zones from 2-9 working except for zone 1. I haven’t tried to manually turn on each valve to verify but will try this idea. Need to learn how to do it though.

Depending on the valve brand, it usually is a 1/4 turn of the solenoid or maybe the bleeder.

Thanks. There is also a brown M wire (P wire in the old controller) which I don’t see in the valve box. Of course, there are also red, orange, green and dark blue wires. Seems there has to be another valve box but I just don’t see the black cable leading to anywhere else.

The M/P (sometimes labeled P/MV or was it MV/P) wire usually goes to a master valve or pump. I do not believe either of these are usually in the same box. To your knowledge, do you have either?

Depending on the model of the valve locator, the zone you are trying to locate have to be active for it to work. Have you tried locating the zones within the valve box you see to verify that it’s working?

Black cable seems to be berried. It is possible that it visits more than one valve box on it’s way to the last one you’ve found. Installers simply cut insulation, use the wires they need and let the rest continue on to the next valve box.

Thanks, Thomas and Gene. I think I have found the box for the cable split. Just need to find where the other valve box is. Maybe it’s buried somewhere near the house. 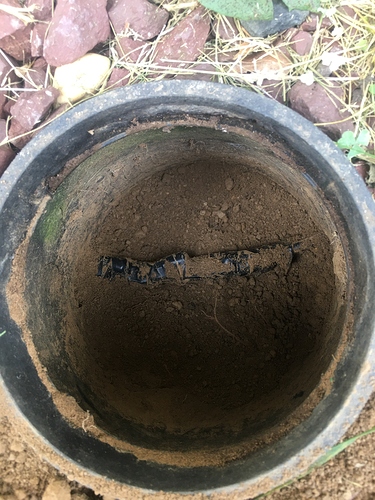 Actually I don’t know if I have a master pump. I just saw the P wire was connected to the original controller so I followed the same for the Rachio.

Thank you for your tip, Thomas. I just checked following your instruction, I don’t have the master pump.

I would guess that also means no master valve. In other words, running a zone without anything connected to “M” has no change in effect?

I disconnected the M wire, the zones were still working.

I do not know if that helps or increases the confusion. Why would someone hook up that wire if it does not go to anything?

Good question! I still need to find out where the other valve box is.

How does the valve locator work? I have never seen or used one before.

The round “box” is where I think you said the cable splits. One way goes toward the controller, another goes to the box you found, can you tell which was the other split goes?

In the original box you found, it looks like the water main ends there. So, it would seem another box would have to be in the opposite direction from the cap. Can you go in that direction to see if you can find a box? Maybe stomping on the ground listening for the plastic cover or a probe (obviously rocks may make all this difficult)? Maybe triangulate the pipe and the split in cable???