Many thanks to @DLane, @Thomas_Lerman, @Gene who helped me with this project: Intermatic to Rachio 3

I was able to successfully hook up my system soon after all your posts (although I’m just now getting around to posting about it. Getting power was definitely the biggest headache!

I’d like to begin the next phase of this project, but will definitely hire out to do it … and that’s to convert the index valves to individual ones. My setup is in the picture. 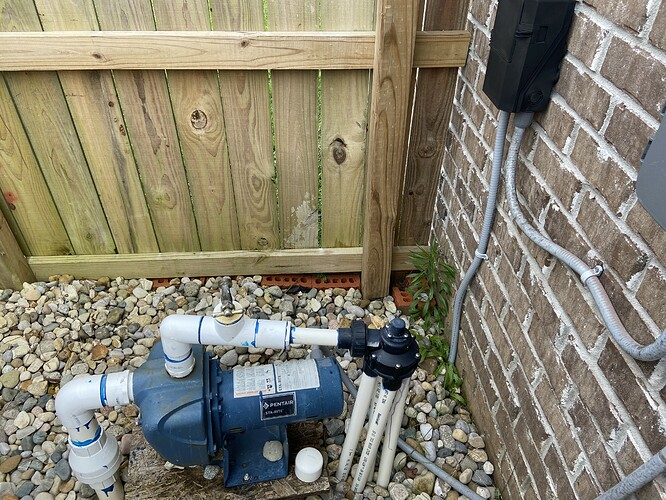 A couple of questions: Between Lowes, Home Depot, and Amazon … the reviews are pretty mixed. Is there something of better quality that anyone can suggest?

Also, with my current setup, will the manifold assembly have to be installed underground?

Many thanks in advance for any help.Preformatted text

As to under or above ground, I personally would say that mostly depends on the area and preference. If little chance of freezing, it probably does not matter so much and if it were me, I probably would do it above ground since it already is and that would be easier. I really would probably see about getting an artificial rock to put over it to protect it against UV, etc. though (well, my wife would probably want it hidden in some way). Since the pump is so close, I would probably see how much heat it puts off and maybe drill some holes in the rock to let heat escape if needed.

Are you looking for a suggestion on the manifolds? I got mine through a sprinkler supply company. I went to their website and it appears to be Action Machine brand. I was thinking it was Rainbird or maybe Orbit, but apparently not. I am not sure there is much difference in the manifolds really as long as they are not too thin in the walls, etc. I have bought some stuff at a big box store, but have been finding the sprinkler supply company that I use to have at least some better stuff.

As to hiring it out, that obviously is up to you. I personally find that kind of thing rather easy & fun to do, so would do it myself. If I were to do this, I probably would start with the fake rock to see how much space I have to work within. Next, I might ‘T’ off the line coming off the pump which would go to the manifolds (guess pointing down), valves, and then the zones.

@Thomas_Lerman Thanks so much for your reply. Being in Northwest Florida, there is definitely chance of freeze for a small part of the year … but I might take your suggestion and install it above ground and either get a rock formation or wrap it in the winter.

As to the manifolds, this is what I was considering: https://www.homedepot.com/p/Orbit-2-Valve-Inline-Manifold-Assembly-57250/202206756. I guess I was seeking out opinion if there was anything of better quality that I should consider since the reviews seem to be mixed on Amazon, Lowes, and Home Depot with this product. Thanks so much again!

I do not think I can respond to Orbit or Rainbird. This is the brand that I mostly have used: 1" Double Manifold | Buy Action Products. I did not see the thickness of your manifold or the style of threading. I think any of these will leak if the O-ring gets dirty or they are not tightened properly. We will see what other comments come in.