I had bought a rachio 2 a long time ago and never got around to installing it. I now want to install it but having trouble figuring out what to connect where.

I have rain sensor but it seems like the old controller didn’t have a sensor port and seems to be “inline” with the common wire. I have two cables that come in from the outside, I believe one is for the “master pump”, and then another for the different zones.

I do’nt really care about having the rain sensor so how should I wire it up.

My initial hunch is that I have to undo the cables from the wire nut and the white wires that were going into that that came from the two cables leading into the box go to C ports on the rachio instead of the existing brown wire that went to the COM port. The brown wire that was coming from the rain sensor is not needed anymore and thus is removed. (This went to the COM port initially). All the wires from the 24VAC port are not needed, two were going to rain sensor and two were powering the initial controller.

The zone 1-5 wires go to the respective 1-5 ports. The black wire going to M goes to M on the rachio.

I’m guessing the ports are the same as labeled in this picture since they don’t seem to be labeled on the box. The picture is from another post for a 476pri controller. 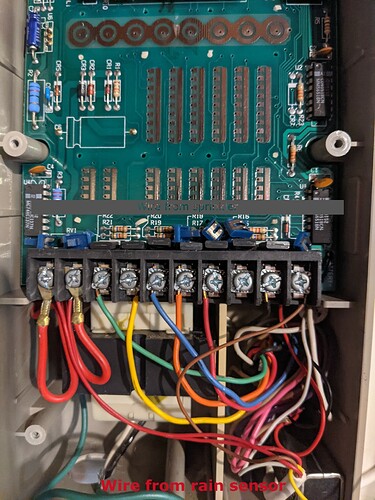 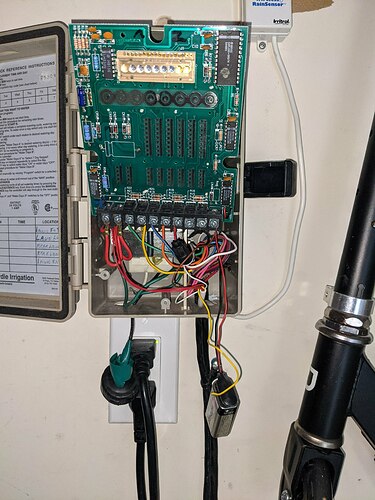 I should have posted this similar thread for a 476PRI to rachio 3 but it looks like its rain sensor configuration was different and it had 24V ac coming in, whereas mine has a plug and outlet nearby.

@veerajs - give yourself credit I think you nailed it. To confirm:

You are correct in that the rain sensor is in-line on the common wire. That is how it had to be wired given there was no sensor port. When the rain sensor was open, nothing would water. That is why it was connected to the common wire - open would break the circuit. The rain sensor can be left out and use a weather station and forecast or it can be hooked up to the Rachio Sensor 1 port. There is a support article that will illustrate hooking up a wireless rain sensor.