Rachio 2 is Watering Three Days after 6+" of Rain

I had a similar issue last July, when the Rachio watered three days after 2+ inches of rain (Rachio 2 Watering after 2 inches of Rain in 3 Days). I made some adjustments from feedback there.

This morning (Thursday the 2nd), three days after 6+" of rain over two days (1.66 on Sunday the 28th, followed by 4.66 on Monday the 29th), the Rachio 2 again ran through a cycle, watering for 98 minutes across six zones. There are spots in the yard that last night (pre-Rachio irrigation) water would come up through my toes as I walked from the 6+" three days ago.

So, looking for some input on what I can change to avoid this.

Because this happened last year with a big storm, I was watching the Rachio through the app to see if it was scheduling anything in the week after the deluge. I was surprised to see something scheduled for today.

Here are screen shots from the day after all the rain: 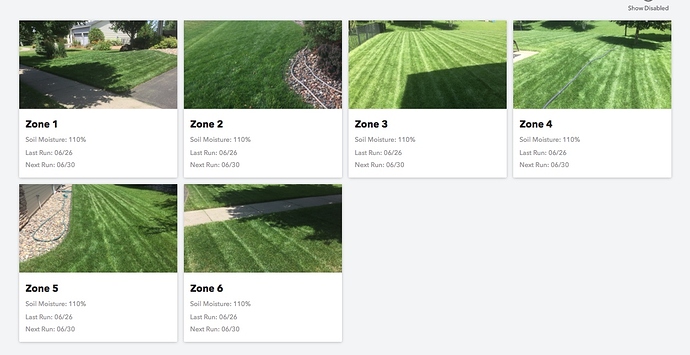 One Zone example (other zones set similarly, except for size, slope and spray head): 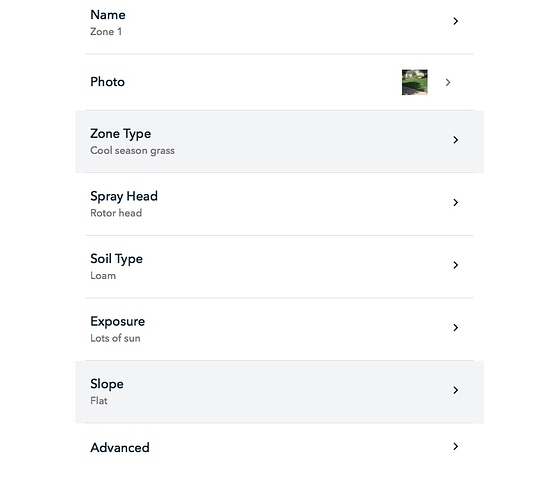 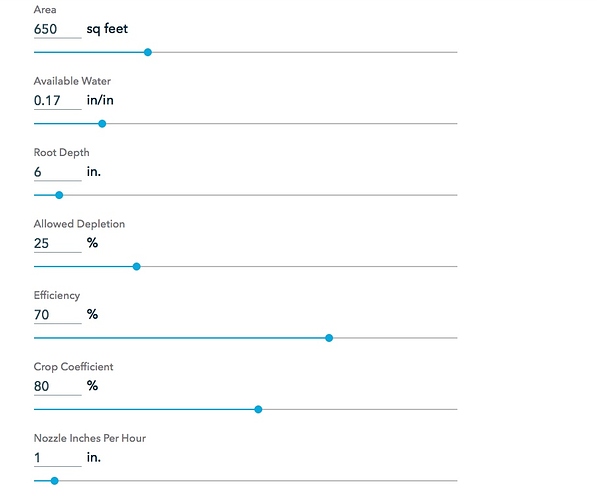 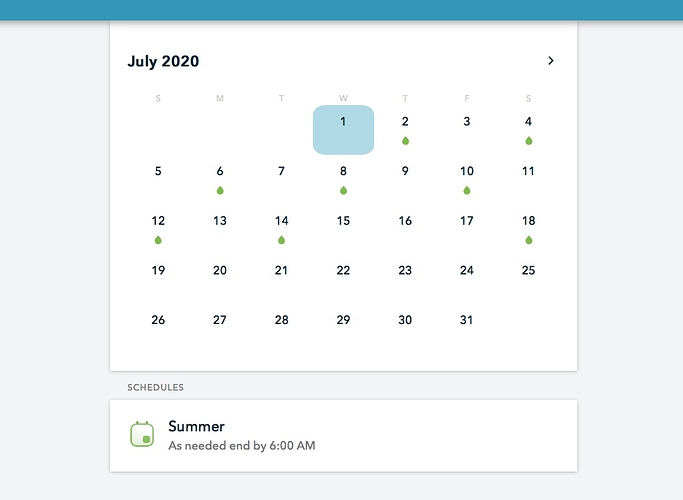 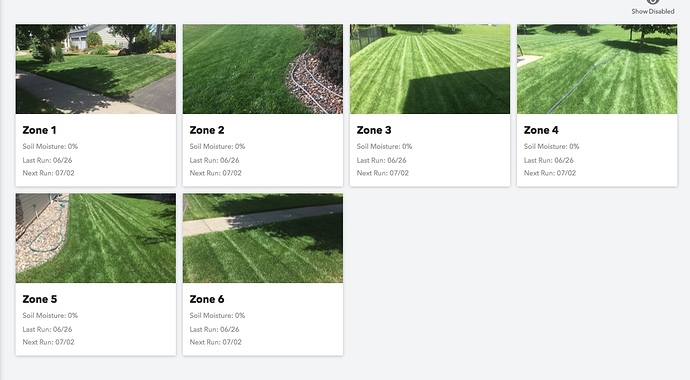 And today, after it ran: 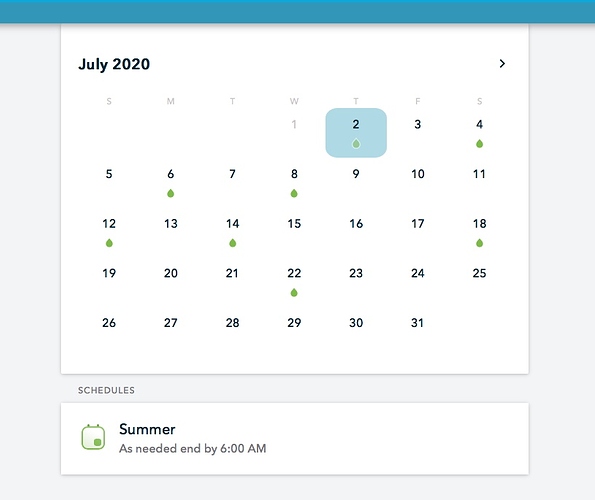 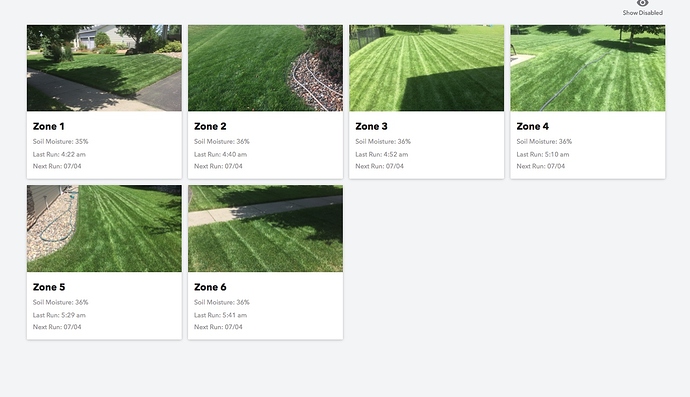 Ideas on what I need to do with this?

Looks like your allowed depletion is set to 25%, meaning that 75% of moisture in the soil are held in reserve and your controller has only 1/4 of capacity to work with. Try increasing allowed depletion and seeing if you see any negative effects with the setting set to something like 50%.

There is also an upper limit to how much water the controller will allow to be added to the moisture totals, anything over 110% of allowed depletion will count as a runoff, so not matter if you have 10" or 100" of rain, moisture will still start dropping from the same upper limit. If you weather is enough to burn through 110% of moisture in two days, rachio will think that it’s time to add more.

Well, that is exactly it then. I originally had it at 50% and meant to allow for more depletion. Instead, I allowed for less.

However, should it have gone from 110% moisture (day after 6+") to 0% moisture in three days? Clearly, my soil did not. How do I change settings to better match the actual soil?

Increasing allowed depletion will mean that it will take longer to drop from 110%, so if you are planning on going back to 50% (or more) deplition, it should already double the time (from 2 to 4 days) that current weather would take to burn through that moisture.

I recommend one change at a time, try deplition first and than other settings if needed.

Thanks, Gene. I appreciate your help.

As much as I love my Rachio and it normally does really well, it does not handle “super saturation” rain events like your 6 inches over 3 days. I have a rain sensor, and that normally helps to keep my system from watering for at least a bit. But when I have something like this happen, I normally go into each zone and mark it to “FILL” for a couple of days, until it seems like it has dried out enough for the regular Rachio moisture tracking to start happening.

I never knew about super saturation until I got my Rachio, and luckily it only happens to me maybe once a year. The soil just gets so waterlogged that the regular tracking mechanism doesn’t work, since it only goes to 110% (which is just fine in the huge majority of cases).

I’m hoping it’s something that they have on their roadmap to try and fix at some point.

I, too, have a rain sensor but no soil sensor (I read somewhere when researching that Rachio does not recommend using a soil sensor … but, ultimately, it looks like more than I want to bother with anyway).

For my situation, I think Gene nailed part of it in that I meant to change depletion from 50 depleted to 25 depleted and did just the opposite. And that setting also affects the moisture estimate (I just saw, as I changed the depletion allowance).

I have filled zones before after a super rain. I did not this time because I wanted to see if the Rachio did what I thought that I was reading it would do (it did, again because I had screwed up the depletion setting and also because I did not fill the zones on purpose).

Is there a single “Fill all zones” option? I am only finding it within each zone (Rachio 2).

I think Gen is right, too. Changing the depletion is going to help alot. But with that much rain over 3 days, I think you would have had a problem anyway.

Is there a single “Fill all zones” option? I am only finding it within each zone (Rachio 2).