Help! All zones suddenly stopped, water source not the issue

Hi, I have had a Rachio 2nd gen sprinkler controller (model 16ZULW-B) installed for a couple years now with no issues, but suddenly it has stopped working. The software and hardware seem to be working, but when the sprinklers are supposed to go off, or when I try to do a quick run, none of my sprinkler zones actually turn on.

I have manually opened the bleed on one of the solenoids and got some of my zones to work, so it appears that there isn’t a water delivery issue (i.e. closed water main valve somewhere).

Any help appreciated! I do have a multimeter, just need some guidance on how to use it to help in this case, thanks 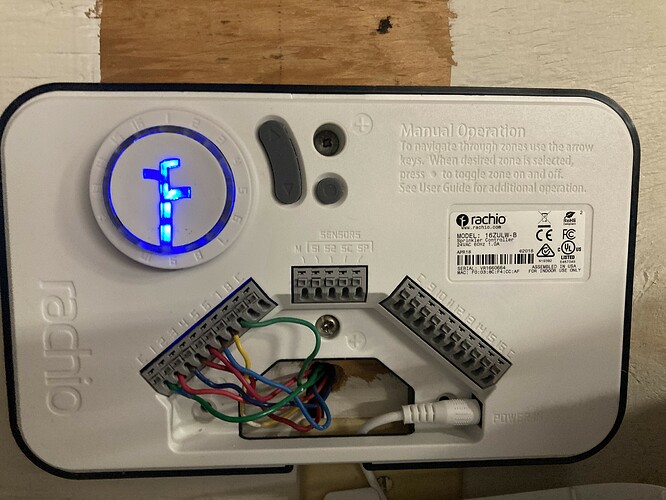 I agree with @Gene on the first place to check. If you undo the wire nut, wires are loose, or if it is grimed up, you might want to replace it with a new waterproof one (or some might seal it up with silicone). If that is not the issue, I would try what is explained in the following:

How to Use a Multimeter for Irrigation

How to Use a Multimeter for Irrigation. Irrigation systems include a controller with electrical wires leading to each valve that controls a watering zone. When a watering zone will not activate, you can use a multimeter to test all of the components...

Is there an easy way to find valve box? Is it usually near the water main or anything? I know where a few of the zone solenoids are and I know where the main valve is to the sprinkler system but not sure if I have ever seen a set of valves anywhere 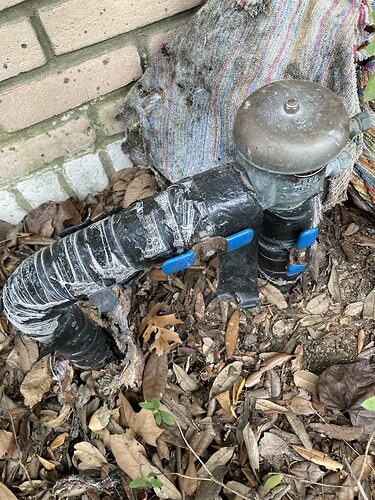 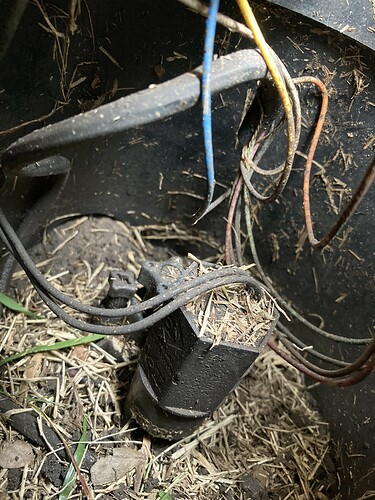 Finding valve boxes: It seems typical that one might be near the water main, but certainly does not need to be. We have three boxes with on being relatively close in the front and the other two in the back. I will likely add another in the back. None of them are very close to each other and they are not that big so they hold up to three valve each. Valves do not necessarily exist in boxes, but I really like them in them.

It appears that you have six zone which would be six valve. The first image looks like a main with anti-syphon. The second definitely looks like a valve in a box. Do you have six individual boxes? It is hard to tell, but it looks like all the wires go into this box, which means they probably continue to the next box. If so, the wire to that valve might not continue to the next, but the common does need to be hooked up and continue on to each valve. Are the boxes next to each other or spread out? Since none of them are working, I would start with the first valve that the wires go to (if you can tell which that one is, otherwise, you might have to check all). Has any digging occurred or work where the wires go from the controller through outside?

No digging that I can think of. I think I know where 4 boxes are, but not sure where the other 3 are (I have 7 zones and 3 are in teh front of the house and 4 in the backyard, so makes sense that the valves are split up I guess.

So the common wire goes from valve to valve and any break in a connection to that valve would interrupt the whole thing? Ug, not what I wanted to hear!

Boxes must be playing hide and seek or just covered with grass, ground cover, or something.

Wiring options that I can think of:

In the first two cases, if a break exists and none of the valve are working, it would likely be at or before the first box. In the last case, between the controller to where they get divided out. You really might have to look at the known location boxes and try to understand what is going on with the wiring. If that is difficult, you might watch the video and try another approach.

So the control box is inside my garage, and on the outside of the garage at the same location I have what I assume are the sprinkler wires going out in different directions, two bundles come out towards the backyard and one bundle goes in a different direction (I’m guessing it goes towards the front of the house but I can’t say for sure), see below picture. Not sure what to make of that! Let me know if you have any thoughts, appreciate your input so far!

Also I can confirm that in the 4 backyard boxes, it is one set of wires that go from box to box, and two wires break out from the main bundle to connect to the valve in each box, the final box does not have any wires leaving, only the two wires coming in. I don’t know where wires in the first box come from (ie if they come directly from the garage or if they go to some central point first)

Sounds like a fun puzzle to try to figure out. Below are some thoughts, guesses, and/or questions to hopefully help us try to work on a wiring diagram of all your sprinklers:

Have you checked to be sure you don’t have a faulty or wet rain sensor. I had a similar situation when I went to fix a broken head and could not turn the zone on. Went and tried other zones and none would work. Got a meter out and was going to open controller when it dawned on me to check the rain sensor. Turns out it had physically stuck in the open position preventing anything from running.

Excellent thought as I could see that causing a problem. However, I do not see that any sensor is hooked up in this case unless I missed something.

When that happened to me, my master valve was the problem. If you have a voltmeter, check for 24 volts AC between the common and master terminals to ensure controller is doing its part. If that is good, then disconnect the zone wire and putt the meter into ohms mode and check for continuity of the wire between the zone wire and the common wire. This will send a current through the solenoid coil also so you should read a fairly low ohms value, like 20 ohms or less. If that check shows good, then you have a mechanical issue with the master valve which is usually the diaphragm. Rebuild kits are available for most brands of sprinkler valve.

That too is an excellent thought and could cause a problem. However, I do not see any wires connected to the Master valve terminal and @Schilliard mentioned that he manually opened the bleed on one of the valve which cause water to come out. At least, it does not sound like Scott has a master valve to me.

Correct no rain sensor hooked up directly to Rachio. I guess even if there was a rain sensor it should run if I ask it to do a ‘quick run’

Rain sensor can be in line with the common, instead of being connected to the appropriate terminals. Before smart controllers, that’s how the rain sensors were designed to be installed.
If faulty, such rain sensor (if installed inline), would cause an issue with commons, and thus any zone you try to run (quick or otherwise).

Correct, I confirmed that the sprinkler started using the bleed on the valve for that particular zone, so I assume no master valve or else water should not have come out

The wiring is weird, I haven’t had time to troubleshoot this any farther than I did last Friday but I’m going to see if I can track down the other valve boxes and see what I can find there. I have the 4 boxes for the 4 zones in the backyard and I found 1 box for a zone to the side of the house so I’m just missing two boxes.

I need to figure out how the common is wired. It’s an old house that has had some word done on it in the past so it might have some funky wiring unfortunately. Just not sure what would have cause it to stop so suddenly

Learn something new every day . . . I did not know rain sensors used to be in-line with common.

I will look around, only been in the house for 2 years but I don’t think I’ve ever noticed a rain sensor anywhere, nor have I ever noticed the sprinklers turning off after a rain other than the weather intelligence function from Rachio

Yup. That’s how mine was wired when I installed on my old system. Disrupting the 24vac common keeps any sprinkler zone from running.