I found the irrigation->zones page is very informative. It shows last run date, next run date. 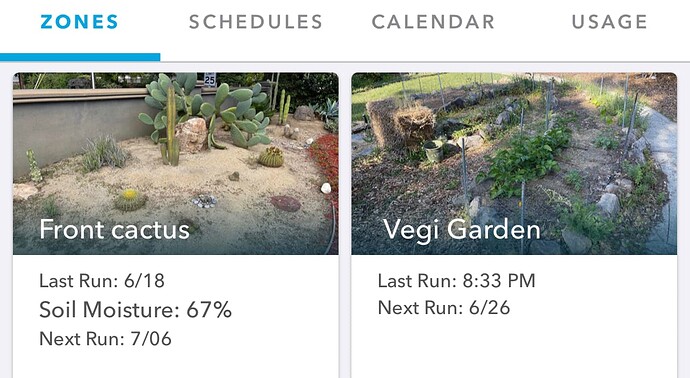 I like this idea. I would also add the runtime for the last run. This additional display, as @Gardencat mentioned, will mean I can do a great deal of verification and monitoring from the Zone page and reduce a lot of poking about in other screens.

PS: And please make this display available in both the App and Web interfaces as I use both extensively. Thanks!

PS: And please make this display available in both the App and Web interfaces as I use both extensively. Thanks!

Not sure if you’re aware, but Rachio has announced they will no longer be developing the web app. This could be a restructuring where the developers will now solely be focusing on making the mobile apps better.

I put my two cents in on this subject as part of another thread on another topic, but I wanted to post it here so it can be heard as loud and as clear as possible. In response to a question about a discrepancy between the mobile app and the web app related to the new Dynamic Coefficient functionality @drew_thayer mentioned: "as a general trend we are not going to support new features in the web app" This tells me that programming and support resources are no longer being allocated to the web a…

Where did you read this announcement?

If you search the forum with the quote referenced in the first posting of the web app thread, it was mentioned in the dynamic crop thread.

Hi @rraisley, as a general trend we are not going to support new features in the web app, but you can still use it to view schedules and make adjustments that aren’t related to new features. For example, adjusting crop coefficient might get confusing since you won’t be able to see the DCC functionality, however you could adjust exposure, efficiency, or other advanced settings without any trouble.

Yes, that is the comment that I read back in May that caused me to start this current thread. I didn’t read it as an official announcement as much as a matter of internal policy. It worried me that they would eventually announce that the web app was no longer being supported, as the first step in that process is usually to stop adding new functionality.

The point of this thread was to point out the “general trend” inside Rachio to users and get their feedback, in full view of Rachio personnel, My hope with this thread was (and is) that Rachio would take notice and realize that many of their loyal users make heavy use of the web app. Based on replies here, it seems that MOST users make use of their desktops to configure their controllers.

I have not heard from @drew_thayer or anyone else at Rachio since this thread was started. Would be nice to hear their thoughts, give user feedback here…