Sorry, the Vantage Vue seems to be a popular entry level station from Davis: 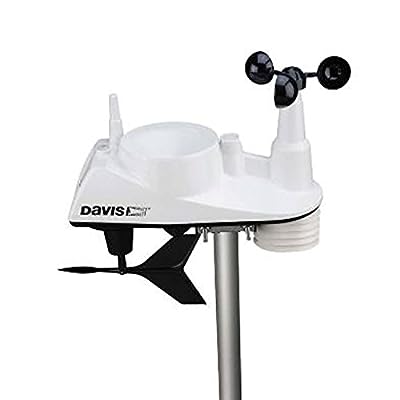 The software that plugs it into the web is Weewx, which is a program that runs on unix machines (not Windows or Mac).
http://www.weewx.com/

Unix tends to allow for smaller, more efficient programs that can be left to run on very inexpensive computers like Raspberry Pi based designs:
https://www.amazon.com/Vilros-Raspberry-Complete-Starter-Kit--Black/dp/B00MV6TAJI/ref=sr_1_7?s=electronics&ie=UTF8&qid=1470778098&sr=1-7&keywords=raspberry+pi

@Modawg2k, thanks for asking! I understood UNIX and the rest was Greek to me!

Took some time to learn a little about weewx today. Turns out it is exactly what I needed to populate CWOP with data from my Ambient WS (which only supports wunderground out of the box).

It was burning me up (pun intented) that PWSweather wasn’t sending Aeris UV/Solar data, which is important here in FL. CWOP does track UV/Solar and apparently it does get sent along to Aeris, which is Rachio’s data provider. Enter weewx to fill the gap.

Not for the faint of heart, but if you have a weather station and like lab projects, check out the weewx socketlogger documentation here: https://github.com/vinceskahan/weebuntu-docker

The other paid option is setting up a meteobridge here: http://www.meteobridge.com/wiki/index.php/Home

Where do palms come into play on a system? I have a hodgepodge of different palms in my system, but in the “tree” zone in question, I have a mixture of trees including a Japanese Bottle Brush Tree a Queen Palm, a Mediterranean Palm, a Jacaranda Tree and an unidentifiable tree (possibly a desert adapted tree)

Canopies vary from 6’ diameter (small, rather unhealthy Jacaranda) to probably 12’ diameter (unidentifiable tree), to a massive Queen Palm with almost 16’ total canopy overhang (sadly, it has been fighting crown rot since I moved in, but it is still hanging on 6 years later, just leans to the right a bit). I used the Water Use it Wisely to calculate the zone run time based on an average canopy diameter of 7 feet and each “tree” has 3 2gph emitters that were sadly all placed near the trunk of each tree. Based on those calculations, I have it pretty well dialed in that the “trees” run about 3h45m, and the flex schedule is running it every 7-10 days, which matches Water Use it Wisely to a T. Is this going to be too much for the palms? I am thinking that it is going to be way too much for the Mediterranean, so I think I may plug at least one emitter, but I am unsure about the others.

Also factoring in that the emitters are all within 2 feet of the trunks and not at the canopy line, should I be worried? This is way longer run times than I ever had with my dumb controller, but it also ran twice a week.

@tmcgahey I just checked my Mediterranean Fan Palms, and I have three 2 GPH emitters on two of them, and only two 2 GPH heads on a third. They should be the same. Two of them are close to shrubs and lawn sprinklers so I don’t think that overwatering is a problem. I also have heads pretty close to the trunk, but maybe they should be moved out. I know I have them further out on my larger Ficus and Brazilian Pepper trees. All of these trees are at 15-20 years mature, so my watering time is 5 hours about every 10 days right now. I have some Pigmy Date Palms that are on my shrub cycle as I’m told they need more frequent watering.

The only concern I would have is that if you’re going from watering twice a week to every 7-10 days watch your trees in the second half of the cycle and see if you start to see wilting on them. If so, you might start a manual cycle. After that increase the frequency using a higher crop coefficient, then every three or four weeks increase it a bit until you eventually get back to the cycle recommended by Water Use It Wisely. If you need to go this route it will allow for those roots to stretch and the trees to become more drought tolerant. Congrats on doing your homework on this stuff. It’ll pay off!

I think they will be ok with the change in watering. The plants left on the property survived a foreclosure in 2010 and went a few months without any water (other than rain of course). They seem to be pretty harty now.

I’ll keep an eye on the watering and make sure I don’t see any issues. This winter I may work on moving the emitters away from the trunks a bit to get better dispersion of the water.

plants left on the property survived a foreclosure in 2010 and went a few months without any water (other than rain of course).

thinking that it is going to be way too much for the Mediterranean, so I think I may plug at least one emitter,

You’re probably on the right track and if you see stress, you can always replace that emitter. Agreed–why water a plant that doesn’t need it?

Good to know @sunny. I always figured the palms weren’t very drought tolerant, but the only reason I thought that is that they had a lot of them on Gilligan’s and Fantasy Islands. I guess that’s not very scientific.

Mary Ann was probably watering those on Gilligan’s Island–after all she was a farm girl from Kansas.

These are the most drought tolerant/low water use and grow very well here in Phoenix.
Fan palms: Washington and Mediterranean
Sago palms
Date palms: Phoenix and Canary Island

I’ve got a mix of Mediterranean, Queen, Sago, Sabal, Pineapple, Pindo, and Pygmy Date. The guy that owned my house before me owned a landscaping design and install company so I think he used the property as a showpiece to show off all the different plants. I literally have a little bit of everything, including a small cactus garden, but it is all done very well!

I’ve got just two pygmy date palms one next to the grass which does great (it ges a lot of water from the grass), and one that is in a little islande all by itself and it’s struggling, not sure how to tacklet it, it got frost one year and hasn’t been the same

They have some really good fertilizer products for palms and citrus!

Oops, I meant that comment for @Modawg2k and his frost-damaged palm.

With the variety you have on your place, @tmcgahey, that nursery must know you well.

Yes, a number of the trees are ornamental oranges, I’m guessing to provide privacy to the back yard. I also have a couple orange, a white grapefruit, and pomegranate. One of the orange trees must be one of those weird grafted trees because the lower portion has a normal big leaf, and the top half of the tree is a very small leaf tree. Both produce a different fruit. I have been trying like heck to keep these around, but I fear the foreclosure left them in shambles. They green up nicely, load up with fruit, then the fruit just kind of shrivels up and falls off. What fruit is left isn’t overly appetizing. The grapefruits have been decent per my wife…I hate the stuff.

Citrus and fruit are all along the right (east) side of the property behind the fence and this area has the benefit of flood irrigation every 2 weeks when I am home to accept it. 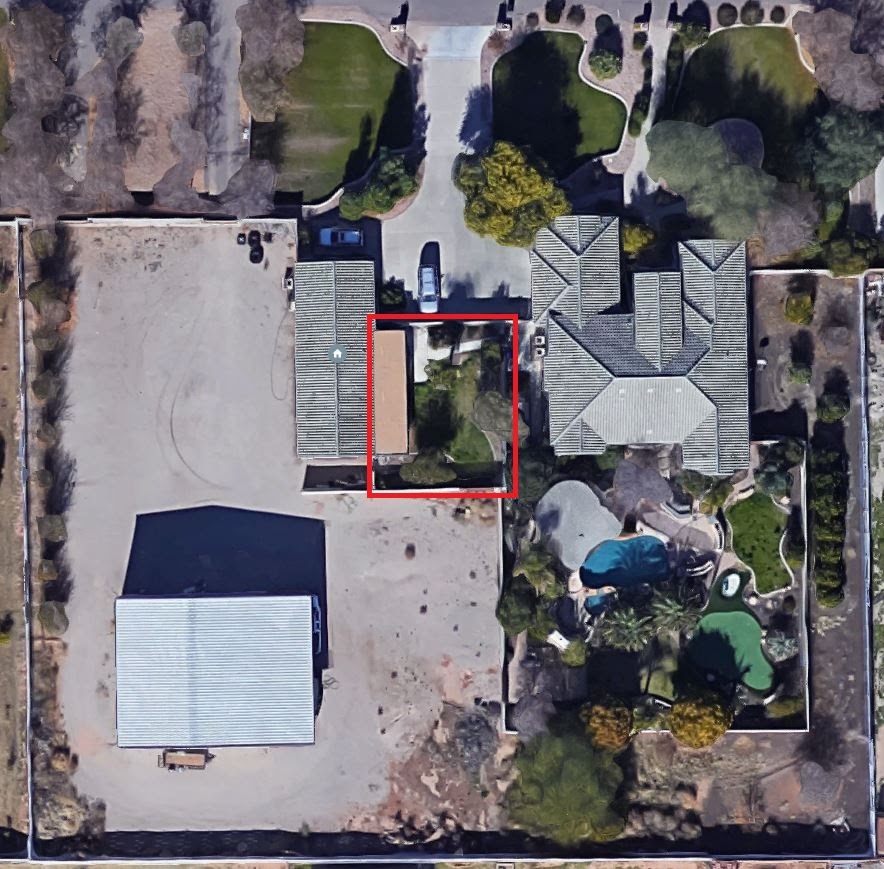 From what I understand, most citrus trees here are grafted, with the lower portion being root stock that is more drought tolerant while the upper part of the tree produces better fruit. If it is obvious the lower leaves are root stock I think they recommend removing any branches from that portion since they will just waste nutrients to grow bad fruit.

To add a bit to what @JPedrego said, citrus trees purchased from a nursery are grafted onto rootstock that was selected for disease resistance for the roots. The upper part, or scion, produces the fruit. The graft on this tree is pretty obvious. A citrus can be grown from seed, but it may take 15 -20 years to produce fruit if ever.

What do you think, @JPedrego? @tmcgahey’s trees still showing effects of improper watering from during the time the property was in foreclosure?

Well for the first time in probably almost a year, I have a completely leak free irrigation system! For the next 7 hours anyway until the next schedule runs!

I still have a bit of tweaking to do on the sprinklers and drip, but I finally capped all the unused emitters (this yard would be NUTS if every plant was still here!), fixed all the split tubing, and fixed broken sprinklers. I started with two known issues, and once those were fixed, other areas in the drip system became an issue.

Also, still have a few spray heads to match up on the backyard sprinkler system, but now I am looking at doing away with my Hunter VAN, and going to the Rain Bird HE-VAN nozzles. Not completely in love with the coverage of the Hunters.