I just had my irrigation installed in May. I get the “zone fault detected” message, but only occasionally. I had the electrician that did my pump install verify that all of my wiring was good. The irrigation company that installed the system verified that the valves are good. This message only comes up about 70% of the time and it doesn’t seem to matter which zone I try to start my schedule with. I’ll wake up, see that I got the message, have to manually stop the schedule and then do a manual cycle, then it works. Any help or suggestions would be appreciated. Is there maybe a longer delay that I need between the pump and the valve from the smartbox so that it recognizes the valve is open prior to running the pump?

There is another thread with relevant information

Pump only comes on half the time? Tech Support

I have a Rachio3 that replaced a Rainmachine. I also have a 3/4 hp pump and Rainbird PSR110220 pump start relay. When I first installed the Rachio, I do not recall having any “zone fault” issues. Then toward the end of last year, most of the time when I activated a zone, the pump would not come on and I would get the fault message. If I turned off the zone and back on again, sometimes a few times, the pump would come on. This year, I am getting this issue quite often. Again, if I turn the …

How big is your pump? Your pump start relay is likely the cause. It is started with every zone, thus issue occurs no matter which zone is run. Surge currents are not caught 100% of the time, thus fault is not always being triggered. Repeated surges is not something you wish to ignore and/or try to bypass the protections. Sooner or later they are very likely to cause a serious controller failure.

My pump is a 1HP F&W CJ103P101 and it is on the complete opposite side of the house from the controller. I had read that you don’t want the pump and the controller too close to each other so they are a good 30-40ft apart. Once the schedule has started I don’t have any issues while it finishes. It’s only on the initial startup when I get the error message. I’ve seen that the valves are open but the pump does not activate.
Per the other thread you linked it appears that they suspect the relay to be the culprit. My relay is a Munro SmartBox, MPLC24.
Thank you for your reply.

I can’t find a surge current rating of the Relay you are using, but it is specifically using a contractor as a main relay.

Since you are only using a 1 HP pump, I’d recommend that the contractor within the pump be replaced with an appropriately sized relay. Basically get one of these (link), take out the contractor, labeled relay here (link), from your box and replace it with the relay from the orbit pump relay.

Gene, thanks for getting back to me.
The Munro SmartBox is for 3/4 to 5 HP pumps. What surge current rating should I be using? I’ll make a call to Munro when they open tomorrow and find out for certain what I have.
Here is more information:

If I’m understanding you correctly, you’re suggesting that I remove the relay in the Munro SmartBox and replace it with the one from the Orbit brand box? I’m very curious why no one else in my neighborhood is having any issues with their hunter and rainbird controllers teamed with the same SmartBox and Pumps?

Normal irrigation valves and standard relays actually have next to no surge current, as such Rachio was not really designed to handle one. You understood the swap suggestion.

Older hunter / rain-bird controllers do not feature current measurement safety features. Contractors, like the one within your pump relay box, often need 100% (max current at 24VAC) or more (24VAC voltage starts dropping) of Rachio power budget, something that is often detected by the controller as a short circuit on the output.

Instead of letting a short circuit damage the controller, Rachio usually shuts down the output and triggers a zone fault, perhaps there will be a software version in the future which allows a master valve to be defined as a contractor, allowing more time for the surge current to dissipate, but I’ve not taken time to evaluate the complete circuit to see the long term impact of the repetitive surge exposure on the product failure rate.

Hey Gene, I’ve got some info that may help others if you run into this again in the future. I spoke with Munro regarding replacing the relay. They basically told me they’ve been working with Rachio specifically, as well as Hunter/Rainbird, and etc. and they have smartboxes made to handle the extra power requirements of the “smarter” controllers so that instead of pinging the controller, the smartbox itself sends the extra amperage to the pump to start. (Something like that, they’re sending me more details. I probably got that all wrong). Long story short, if you’ve got 220V to your pump you need the MPLC242W22. If you’ve got 110V you need MPLC242W11. The current model I have is the MPLC24 and they said they expect it to phase out completely with all of the smart controllers.
Thanks for all of your help. I’ll be replacing my Smartbox and I’ll check back to let you know how things are.

Thanks for the part numbers, it looks like they’ve switched from using 24VAC contactors to 110/220V versions (depending on the part number you get), this allows them to drive the contactor with a line voltage and control it with a low power 24VAC relay (marked X within the drawing, kind that smart controllers will not have issue with). 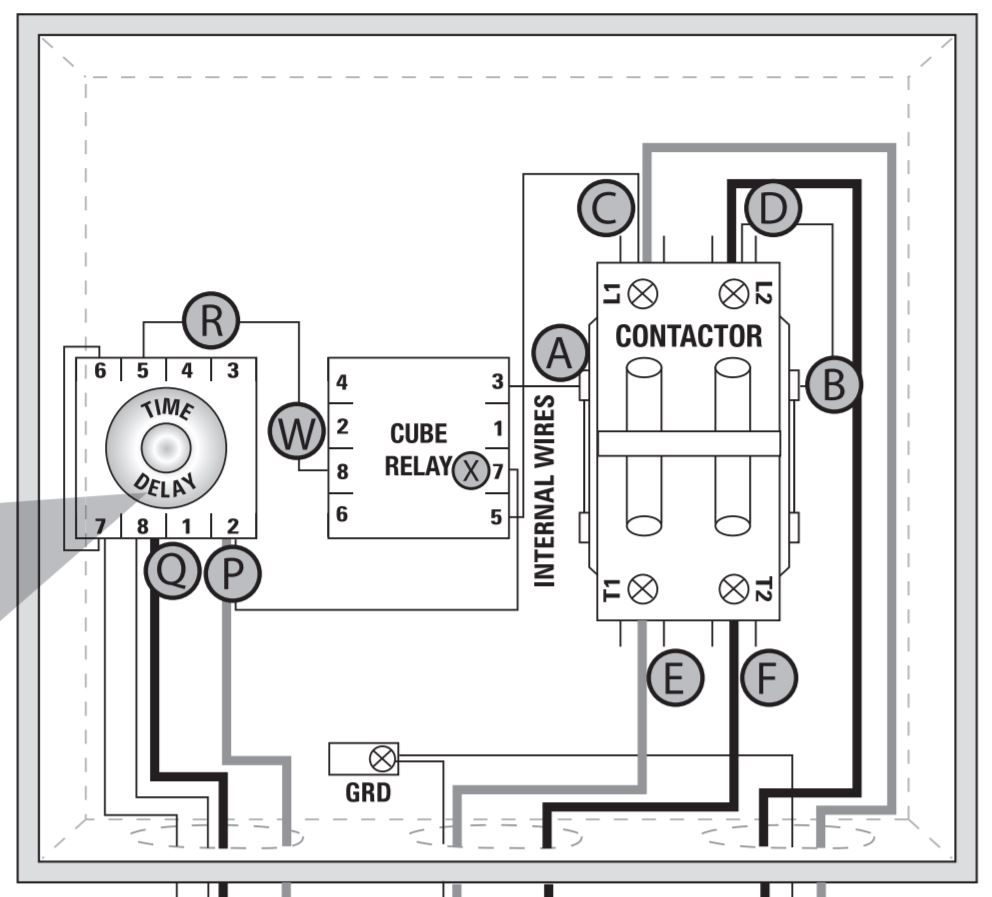 Note: If the new relay would be able to handle the current needed by the pump (such as the relay from Orbit design), you would not need a contactor, since the relay alone would be enough. This is, in essence, the suggestion I’ve made to remove the contactor and use sufficiently large relay in it’s place.