Zone 6 not getting power

I installed/used my Rachio3 - 8 zone last year and it worked great.

Our secondary water was just turned on today (May 1) and I’ve been testing my system. However, I can’t get zone 6 to get any power. There are no faults detected. The actual wiring/solenoid/valve is fine since it works if I move the feed to one of the other zones. The multi-meter shows 24-ish volts to the other zones, but 0 volts for zone 6. I’ve powered off/on the controller as well but nothing fixes it.

I thought there was a chat line open to support but I can’t find the link anywhere so I did send an email to support, but hoped maybe there was another way to diagnose/reset the zones.

@PredatorVI - moving the wire from zone 6 to another zone (zone 5 for discussion purposes) and zone six works shows that the zone wire, common wire and solenoid all work. When the wires were moved, was the other zone tested (move zone 5 into 6 and try to run zone 6)?

Outside of a bad connection at the Rachio terminal strip, I think an internal component on that zone may have given up the ghost.

I think emailing support at Rachio dot com is your best bet. Rachio has a two year warranty.

If you have a spare terminal on the Rachio, zone 6 could be moved there.

Yeah I tried running zone 7 in the zone 6 port and no go. I did email support so we’ll see what they say. Unfortunately I don’t have a spare port but it’s probably the least critical zone as it does get some overlap from other zones so I disabled it for now.

Just a follow-up. It was a hardware issue and the replacement (under warranty) is working swimmingly. I was also having frequent WiFi disconnects and since the replacement, I’ve not had one disconnect.

I did add a surge protector before installing the new one just in case.

Glad to hear it all is working. Out of curiosity, did you put the surge protector on the before the transformer and do you think that is what caused the faulty zone?

I don’t think the issue was caused initially by a power surge but I didn’t want to take chances again.

This is the setup as it currently sits. 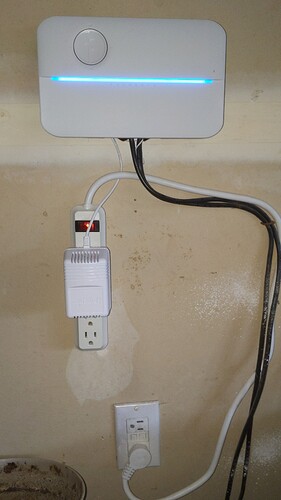 It almost certainly was not. Particularly if no other electronics in the home were affected. Plus it’s unlikely a power surge would have taken out just one particular zone output. Perhaps a very close lightning strike, but that, too, probably would have taken out more than one output. Odds are it was just random component failure. It happens.

I really was thinking it was not a power surge either, but the protection sure is nice in case. Not that we have experienced lightening very close that I know of, but I know that I have read it can be an issue with sprinkler wires. I believe I have even seen lightening suppressors for these which seems like it would protect the controller, but does not seem like it would protect valves & wires. So, kind of wonder about those too. Could be an interesting discussion at least to me.