Why watering isn't done to near 100% field capacity?

I see a lot of instances where Flex Daily seems to only water in small increments. Looks like it particularly found of .24" per watering. In the chart below, for example, why on 6/19 it’s not watering to a much higher level? 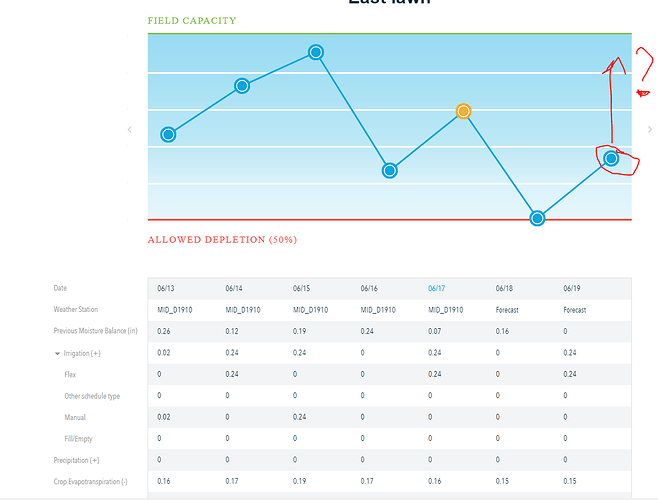 Here are the zone’s settings: 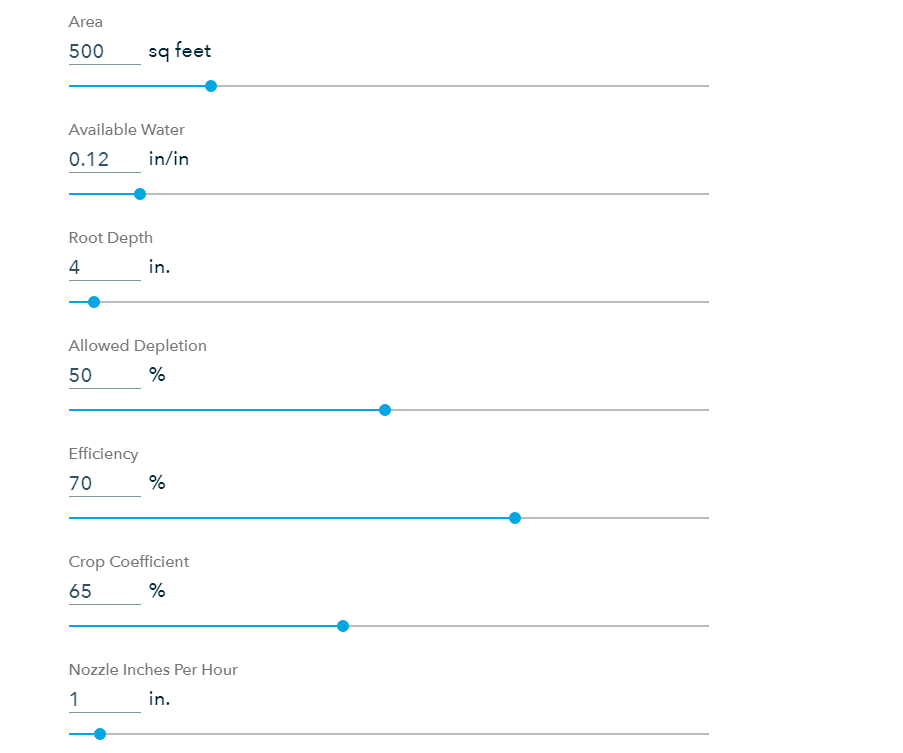 It’s watering with 0.24" of water because that’s what your settings told it to do:

0.12 Available Water x 4" Root Depth x 50% Allowed Depletion = 0.24". I’m thinking the 4" root depth has been changed from the recommendation from Rachio and should be higher.

Ah! I had an inkling this had something to do with depth. Thanks for clearing this up for me.

Is there any other factor that changes that calculation of how much water per application and how often? I’ve had all my grass zones the same, .15 AW x 6" RD x 50% AD = .45 in per application. For the most part its done so by that calculation but there were a few days in a row that it was doing about half that (.22ish). You would think its watering less because it gets to 100% but literally none of the applications get the zones up to 100%, so it waters almost everyday. 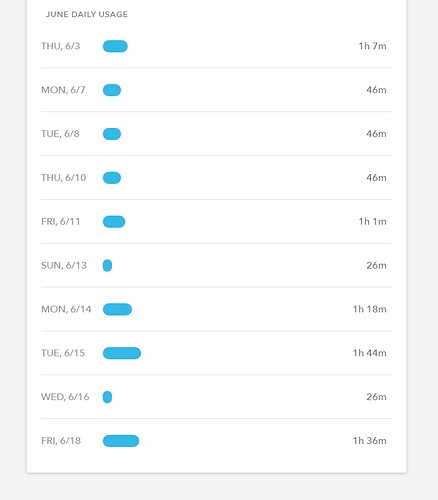 I’m still trying to figure out why it is adjusting watering times, watering almost every day not getting to 100% when evap and the other settings are staying very consistent. There must be something else going on right? Any ideas? I’ve tried deleting the flex daily schedule a couple times and creating a new ones with the same parameters but same thing keeps occuring. Today it watered the exact time based the that calculation but its only at 52% soil moisture. Is that 52% actually 100% because I have AD at 50%?

I would imagine that the result of the formula is then adjusted by ET/CC and precipitation. But you said that there were no ET changes (and no rain, I assume). I wonder what else is left… But can you show your moisture chart/table?

Is there any other factor that changes that calculation of how much water per application and how often?

Not that I’m aware of. Maybe a developer can give a better answer. I have seen the amount applied vary, usually when starting back up or maybe after a heavy rain, but not running consistently different figures.

I agree with everything you’ve said (happy to see others look at it mathematically too). Is the history above for a single zone? And what was the Rachio-calculated time for that zone? I’ve looked at mine, and they’re all the same. 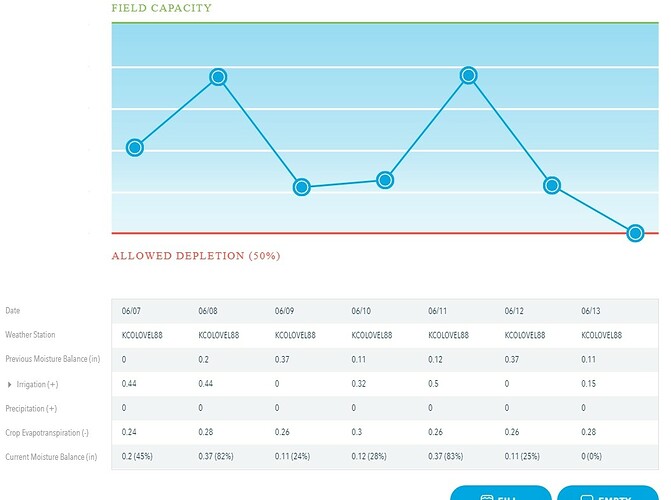 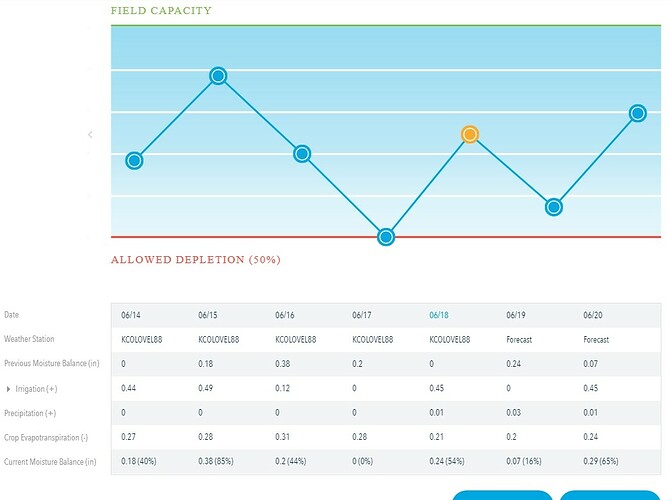 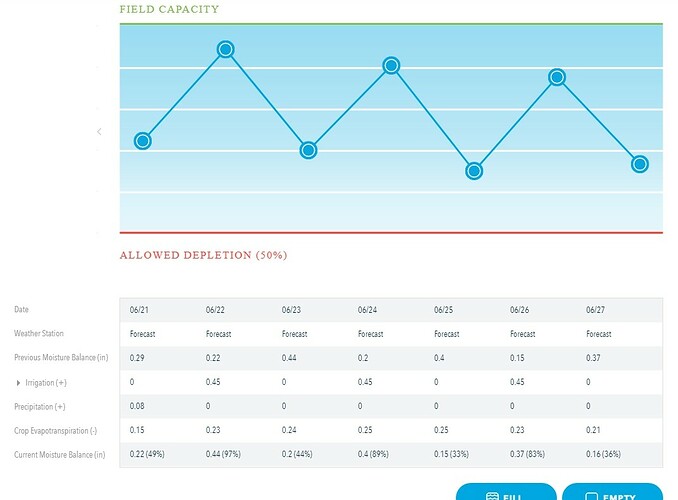 I had my zone 1 (pictured) mixed up with my zone 2 as far as the average ET goes so the watering once per day makes sense at least since the average ET for zone 1 was about .3. Correct no rain.
Looking at the future watering 6/21-6/27 it shows .45 inches every couple days which is accurate. Still curious about the watering amounts varying before 6/21 and the soil moisture %s. Wouldn’t the calculations make it adjust watering to hit 100% moisture? There must be something else going on or I’m just reading it wrong.

@rraisley That was all for my zone 1, calculated time is 97.1 mins.

There’re not enough data points to be certain, but it does look like watering times start to get wonky when ET goes above .25.

Wouldn’t the calculations make it adjust watering to hit 100% moisture?

No, it doesn’t work that way. Well, in theory, it does, but since watering usually takes place early in the morning, and the ET is taken away during the day, you will end the day with a lower moisture percent.

The “normally” calculated irrigation amount is equivalent to the distance from the top of the graph to the bottom. If you start out at the bottom (0%), and water the “normal” amount, it will go to the top of the graph (100%). But the graph also shows the Crop Evapotranspiration (ET) for the day, so it deducts that amount, meaning it never quite makes it to 100% (unless it rains).

But starting with 6/7, the irrigation amounts are 0.44, 0.44, 0.32, 0.5, 0.15, etc. Certainly NOT a constant amount. Are you sure other watering hasn’t occurred on those days for the same zone? If you hit the little triangle beside “Irrigation”, it shows the source of the watering. Be sure it’s all from the same Flex Daily program. There was certainly no reason for it to water on 6/16, for example.

Usually the only time Flex Daily will adjust watering duration is when there are watering day restrictions. Do you have restrictions from your city on what days you can water?

@rraisley I did manually water 15 mins each zone on 6/11 when I was doing a catch cup test. Catch cup didn’t work as well as I hoped, ended up sticking with my calculation based on flow per head and area of zones instead.

@tmcgahey No restrictions, have it set for any day Sun-Sat. Only thing I’ve changed a couple times is the start time. Was messing around with end at sunrise vs end by 7am to finally choosing begin at 3am to avoid schedules rolling into the previous day. Maybe the issue I’m seeing is because I changed start times of the schedule regarding what @rraisley mentioned about the ET.

Wow, it really is varying the Flex Daily amount. While I think a feature like that is a good idea (but done differently), I have no knowledge of a Rachio method for doing it. Perhaps dane CS Manager can answer why Flex Daily irrigation values would vary?

I had Rainmachine for years which would adjust watering times based on whatever algorithm they use but it was all fixed scheduling. I like Rachio’s setup better now that I’m getting used to it but yeah it would be a nice feature to also have watering times or start times adjust based on some algorithm for other climate related things.

If me changing start times had no affect on those run times, the only other things I can think of is maybe something to do with the specific weather station I’m using or possibly brief power disruptions throwing the controller off? The forecasted run times for next week look correct so I’ll see if it sticks to that.

Thank you all for your responses!

I had Rainmachine for years which would adjust watering times based on whatever algorithm they use but it was all fixed scheduling.

I’ve made the suggestion to Rachio that they implement a version of Flex Daily which would use the same values and graphs and such, but allow you to specify specific days to water, and then Rachio would vary the amount of water based on ET values each time, rather than adjusting the timing with fixed watering. Don’t know if it will ever happen, but I think it would be good for those wanting to use Flex Daily (due to using actual weather and rainfall), but are more limited to when they can water.