Watering duration not getting close to 100% Soil moisture

This morning I went to check Sprinklers on my zones to see how they were watering.

I opened the Rachio app and noticed that both my schedules that are on Flex daily are not getting the zones even close to 100% after moisture level.

I have 2 schedules on Flex daily. One has Zone 1 & 2 and the other schedule has Zone 4 & 6. Both water according to my restrictions and water on Sunday, Wednesday and Friday. I know that many people suggest not using flex with water restrictions of only 3 days, but the month of May my yard looked great.

Last month they watered great and my yard looked wonderful.
May run duration

This morning (Wednesday) both my flex schedules went off. 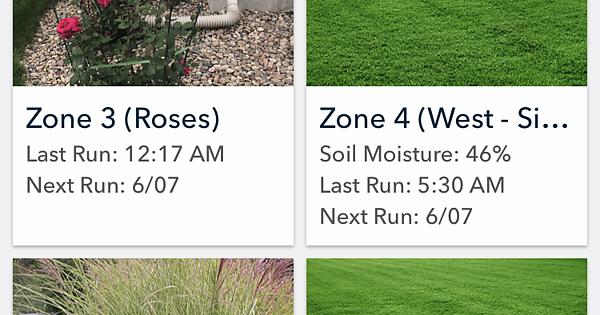 I haven’t noticed my lawn dying yet, but it concerns me that it’s not getting the water levels to 100%, not even close.

Should I increase watering duration, even though I’m using more than my previous Hunter x core, or what?

Should I increase watering duration, even though I’m using more than my previous Hunter x core, or what?

The soil moisture is the end of day moisture, and it includes moisture added through watering, and moisture lost through evapo-transpiration. Since it is very hot, it is loosing a good amount, but at the same time, you are watering to replenish what is lost and more. That’s why you probably don’t see signs of drought. And keep in mind that 0% soil moisture means that only half of the root depth has no water. So the roots in the bottom half (although not as many) can still get access to water.

I have tweaked my settings to water more, but less frequently. My preference is to train the roots to seek water, so stressing the grass by watering infrequently and deeply is what I have been trying to achieve.

Can you confirm if you are on Flex Daily Schedules or Flex Monthly? The fact that you mention you got an email about adjustments tells me that you are on Monthly…

I have 2 different Fixed Schedules.

One for zone 1 & 2, and another for zone 4 & 6. I have them disabled as I wanted to see how this Flex schedule wood work out for me.

Still confused. You mention you got a notification of watering durations changing. Flex Daily doesn’t change duration, only frequency, and it never notifies.

Sorry, just trying to make sure I know what schedule you are running before dicing into it.

I am on Flex daily.

The email I received was for my fixed schedules for zone 1 & 2 and 4 & 6 that are disabled.

I have them disabled since I’m still determining if I’m going to stay with flex daily.

Yes, I read that earlier today. Thanks 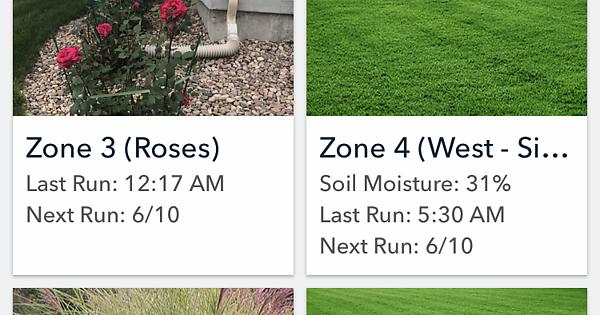 My next time to water is in 3 days, Wednesday.

One of the main differences between my new Rachio and my previous Hunter XCore timer is that I had a Hunter Solar Sync hooked up so that everyday at midnight the solar sync would adjust the % of watering duration for each zone based on the days temperature.

I know that I can go to fixed schedules for my flex zones that don’t even get my % of soil moisture even close on my zones, but then I’d feel like I’m right back at setting up my run times just like I did with my hunter. If I do go to fixed schedules, then what was the point in spending lots of time inputting all of my information such as, my 67 sprinklers on yard map, soil, etc? I went through and wrote down each pop up head and rotor head model numbers and researched on the internet what there specs were. I then put tuna fish cans out in my yard and checked the flow. I dug up parts of my yard to determine what type of soil I have. I’ve spent a bunch of time setting this up. I even upgraded my previous Davis vantage vue weather station to a new Davis Vantage Pro 2 weather station (yes I know I can use some stations near by, the closest one is almost 1 mile away) I want my Rachio to be as accurate as possible.

As it sits right now, my 2 flex daily schedules are actually watering more than my previous Hunter was without taking into account the Hunter solar sync assisting the duration daily.

I’ll monitor how my grass, and trees do, they might be completely fine, they might not. If the grass and trees freak out then I’ll need to figure something out.

@steeve725 There might be something in the advanced settings that could explain this. Could you share the settings of one of the zones? And also, a picture of the moisture graph “More Details” table.

I hope this is what your looking for. 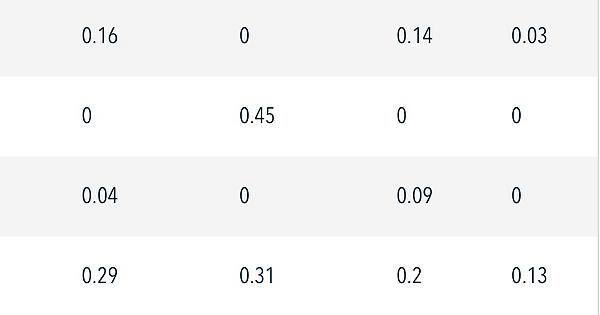 The question you might want to ask yourself is what is best for the grass. I think the health of the grass is better when it is not too moist (which can attract diseases or pests such as grubs). Some research actually shows that deep watering and less frequent is better. I have been tweaking my settings to go down to 85% Allowed Depletion so that 4 days goes by without watering (I am in the north-east and currently temperatures are not hitting 85 yet).

So I am keeping an eye on the grass health, and any signs of drought, etc… So far I am fairing better than others in the neighborhood who have signs of drought (it hasn’t been raining enough in the past few weeks).

You have to understand that they use “stupid math”. When it says you have 30% water left, you likely have about 65% available water left. If the allowed depletion is 50% then the system keeps the amount of water between 50 and 100%. The 30% is 30% of 50% of the available water.

We’ll see how things work out.

Early this morning both my zones 4 & 6 I’m concerned about the most were at 0% and there not set to water for 2 more days. Zone 4 faces west with a little shade, zone 6 faces south with no shade, and according to the “more detail” in the moisture level, the sprinklers will give zone 4 - 0.46

I’ll see how both these zones do