Hopefully, I will be able to explain my question the first time. My configuration has been installed for about 4 years.

First, we will start with my configuration. I have two (2) Gen 2 controllers on the same Common wire connection. I have installed Isolators as recommended by the Rachio support staff using the Master Valve installation option. I have a total of 21 stations. I also have an Ambient Weather WS-2902 PWS (KTXPLANO316) in the configuration and it is attached to each controller via the Weather Source setting.

I live in an area of North Texas with watering restrictions. I am limited to irrigation on Tuesday and Friday of each week between Midnight to 9:00 AM and 6:00 PM to Midnight.

Both controllers are basically setup the same way. Main yard (front and back) is primarily the wonderful clay type soil that only a demolition expert would enjoy while the landscape beds are more of a combination of good sandy loam and the wonderful clay. There are lots of trees scattered throughout the property, but the majority of the lawn is in full sun. The lawn is a combination of Bermuda Grass and Emerald Zoysia. The landscape beds have shrubs, variety of perennials, and annuals. I try to practice organic techniques however the nutsedge and some other pesky vine are starting to get a little annoying. I am using a Flex Daily schedule that appeared to work OK the previous 2 years. I used the default values for root depth, etc.

Last Monday, Tuesday, and Wednesday we received over 3.22 inches of rain. The bulk of the rain (2.91") was on Tuesday. For the 10 days prior to last week’s rain there was no rain and the soil moisture for each zone was at 0% for several days and the Flex Daily schedule did not activate on either the Tuesday or Friday before the rain. The NWS did not predict the rain until later in the day on Friday before the rain storm. After the rain, the soil moisture showed over 100% for each zone. In fact, it still said over 90% for each zone on the Friday immediately after the rain. However, the Flex Daily schedule ran for each zone on the Friday… There was standing water all over the yard on Friday morning.

Not sure why the system ran after the rain storm, but did not run at all during the dry spell prior to the rain storm. Any insights would be gratefully appreciated.

Would be helpful to see some of the moisture graphs from your zone(s) for the period in question.
Also, what exactly does your history show? It’s helpful to check via the website (rather than the app), at app.rach.io

Apologies for taking so long to get back to you.

Let me see if I can “verbally” explained the screenshots I will include.

As mentioned earlier, both controllers decided to run on Friday (27th) after over 3 inches of rain that occurred Monday through Wednesday with the majority of the rain on Tuesday (24th).

When I looked at the app last night, it said both controllers were Skipping the Tuesday schedule. I manually Overrode the Skip since the moisture level for all stations for both controllers was in the single digit range and the lawn guy applied his magic on Saturday which needed the application of some water on my next allowed day (which was today). 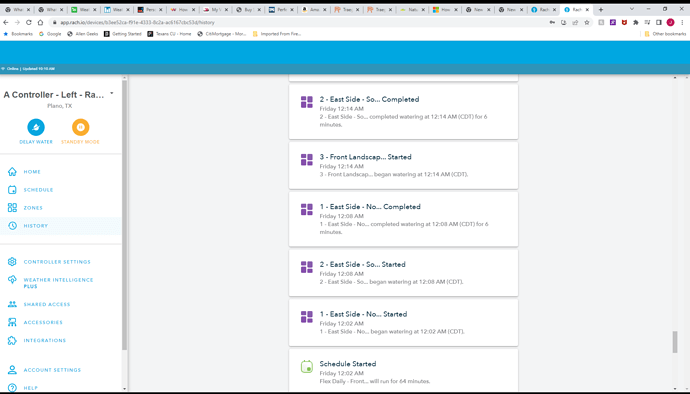 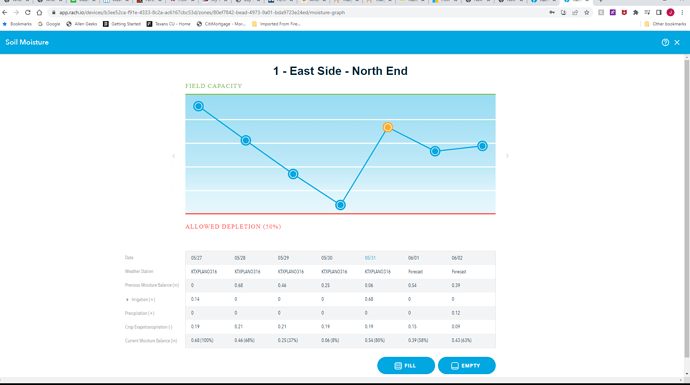 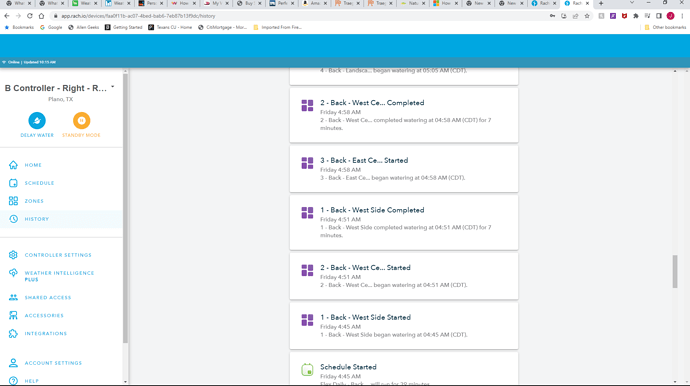 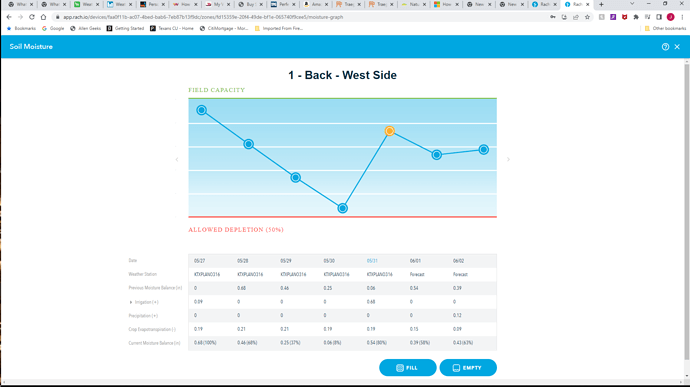 There are barely visible arrows on the left of the graph, it will allow you to see the last week, where the rain data has affected the moisture the most. 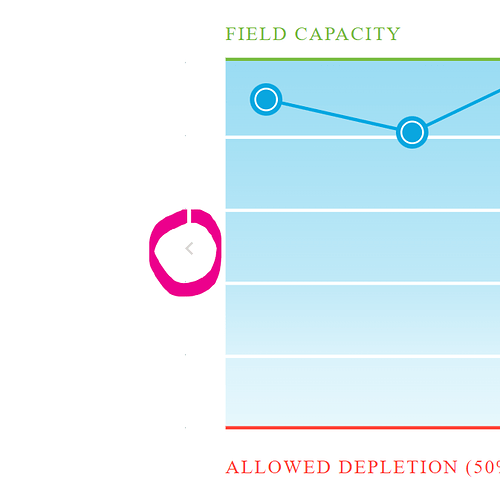 That being said, seems your current settings deplete the moisture reserves in about 3 days, and the Rachio software treats everything above 110% of allowed moisture levels are runoff losses, thereby negating probably 2/3 of the rain you’ve gotten.

You can check the soil moisture with spot digging after watering and about the time it slows close to 0. From there you can increase amount of moisture the zone can hold (if soil seems a bit dry after watering, or still wet close to 0), thereby increasing the time between watering / after a heavy rain.

Seeing your current depletion slopes, heavy rain is not going to do much more than what your regular watering would. Amount of time to the next watering would be about the same.

This is something I’m battling with. We have clay soil which holds so much of the water in the soil. By selecting clay soil the awc increases which in turn increases the duration which is what we can’t have. To counter that and reduce the duration I had to bump up the nozzle inches per hr. I know my sprinklers can put a half inch down within 20-28 minutes.

There are several settings which effect the duration in different ways.
awc (available water content) is one, allowed depletion (higher = dryer before watering) is another. Root depth and crop coefficient effect the volume of water in in the considered region and the rate of dissipation.
Your best bet is to start with allowed depletion as it’s easiest to judge. Dig down to the root when it’s pretty dry (close to 0% remaining) and see if you want it to have more or less moisture. Increase allowed depletion to make it drier, decrease it to water sooner.
Clay soil is not very good at soaking in water. You should be using a soak feature within your schedule settings. It also means that more of the rainwater will be lost due to a runoff, so you have that to consider when thinking about heavy rains.

Thanks for the quick replies. Thanks for the hint about finding the arrow to go back in time on the soil moisture charts. As you can see, it is at zero for several days. If I go according to the calendar day to which I have been assigned, the sprinklers should have run on 5/20/2022. My Flex Daily schedule is setup for Tuesday and Friday.

I will attach the moisture charts after I left clicked once. 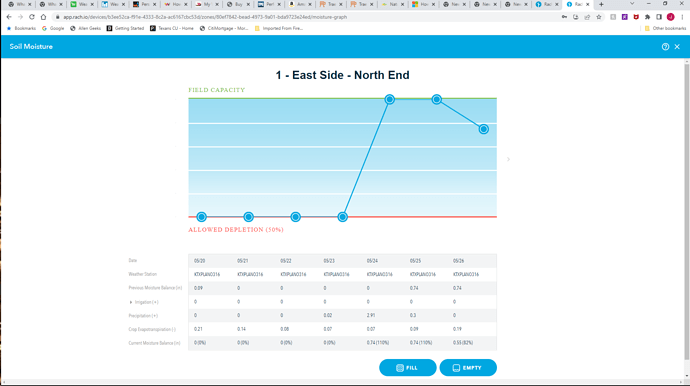 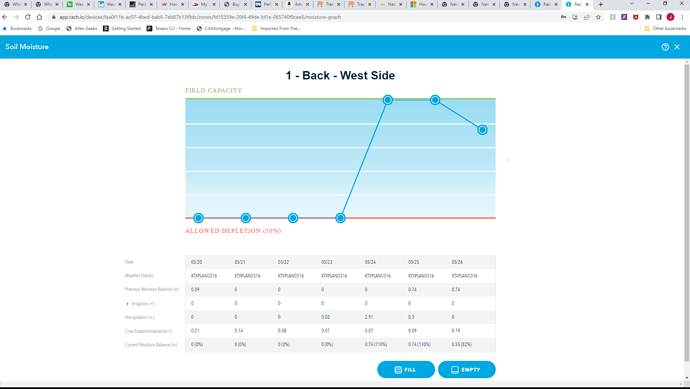 If I go according to the calendar day to which I have been assigned, the sprinklers should have run on 5/20/2022

Can we see the settings and advanced settings for that zone?

@Gene @Gerardv514 Of course I can see all the settings for all zones. Not sure what you are asking since that question does not answer my question. I only asked should the number increase or decrease. There does not appear to be any explanation of the values to be used or a user manual.

Of course I can see all the settings for all zones. Not sure what you are asking since that question does not answer my question

Actually you didn’t answer my question in that can WE (not you) see the settings of the zone. It would help identify which setting is causing you not to water on the date that you expected. For the first few days you’re at 0% moisture and watering wasn’t triggered. There something off in your settings. Can’t help you if we’re blind.

If I go according to the calendar day to which I have been assigned, the sprinklers should have run on 5/20/2022. My Flex Daily schedule is setup for Tuesday and Friday.

Also it has been mentioned in documentation that flex daily doesn’t work well when you only have it selected for one or two days. This is why it won’t water.

@Gene @Gerardv514 I am using Flex Daily at the recommendation of Rachio Support. I know there have been several posts “debating” the merits of Flex vs Fixed in drought areas. I was using a Fixed Schedule, but it was still watering all the time after a rain storm. As far as I can tell, all the settings are what they have been since the initial install for each zone. Everything worked fine last year. There were no updates to any schedules from my end. As I mentioned before, most of the values are the default values. The only thing I changed for each zone was the area covered by each zone.

I have attached the Advanced Settings for the first zone on the A Controller. 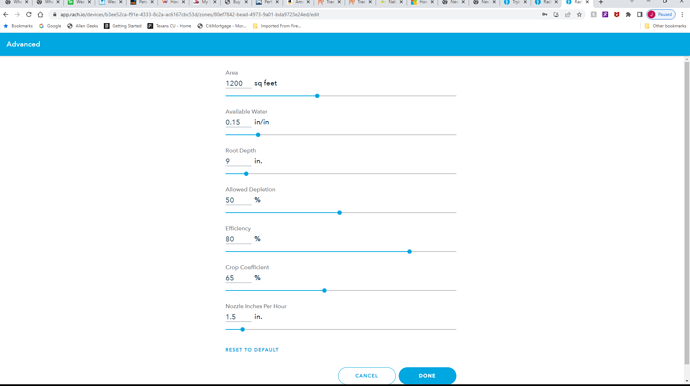 @j.rieff im pretty sure your issue is because you’re using flex daily with watering restrictions.

You mentioned it rained on a Friday and even with the rain it still watered. That’s because it knew it wasn’t going to water again until once the following week. So it watered just in case there was no rain forecasted. Others here can probably better explain why watering restrictions don’t work well with flex daily, I’m sure I’ve even see Rachio themselves recommending not to.

Sorry, been busy.
Increasing the allowed depletion would increase the number of days between waterings and make it so that you soil is dryer before being watered again.
It would be nice to see the history around the 20th, it should spell out why the schedule was skipped.
Personally, I prefer flex daily, as it’s just as good as fixed at looking ahead but has an advantage of keeping history data to avoid excess irrigation.
If you are worried about going too long at 0% level, than you can add a second, separate fixed schedule to give your plants at least 30% moisture before a long pause.

@j.rieff here you go, from a quick google search maybe it can better explain.

• Any Day
• Specific days of the week (i.e. Tuesday and Friday)
• Odd/even interval

@Gene @Gerardv514 Strange thing. There is no history for the 20th with respect to the Flex Daily schedules. I have created a Fixed Schedule for the Landscape beds and they appeared in the history. These run for about 1 hour in the evening just right before sunset. I know that is not the best, but probably OK for heavily mulched landscape beds.

I did notice something real strange tonight. There is a 60% chance of rain overnight. NWS says around 0.5". Of course, I do not believe them. We are in a La Nina climate right now. I have my controllers set for 0.75". Sometime within the last 2 hours, the Flex schedule for the A controller disappeared from the calendar. However, the Flex schedule for the B controller still shows in the calendar.

Based on discussions with many installers, I installed the Rachio Gen 2 in order to link to a PWS in order to get some “dynamic” control over the watering durations. Last year everything looked like it ran as expected. When it was hot and dry a little bit more duration occurred. When it rained, little bit less duration. Freeze control worked as expected in the winter.

Maybe I need to go back to a Fixed Schedule. Just trying to do my part in saving water resources. Even my city is recommending the Rachio controllers and they are the ones who established the restrictions in the first place.

Maybe I will play with the depletion number for the next couple of weeks to see how everything reacts. Larger number (> 50) for drier soil; smaller number (<50) for a little bit moister soil.