Too much water per week for hybrid bermuda?

Hi guys, it sure seems to me like my Flex Daily schedule is trying to water my grass too much. It is putting down about 0.9" every 3 days, which is roughly 2.25" per week!!! Holy hell! It’s not even averaging 100 degrees yet here in Phoenix. Also, I have a hybrid bermuda called BOB Sod which they say is quite drought tolerant. I want to confirm with them if 1.25" per week is enough. For now I’ll shoot for 1.5" per week, every 3 days.

All of my settings are correct (not speaking to AWC or Crop C) and I don’t want to have to manipulate PR (nozzle inches per hour?) because if for no other reason, I’ll forget the number? I did one of those 10 cup field tests to get PR and efficiency. Seems like my only other option is to play with crop coefficient?

I have noticed that Rachio overestimates the dynamic crop coefficient for lawns.

Here is an example for the Phoenix and Tucson area. You can see the footnotes 1-*. I take the monthly value Kc in Table 2 and subtract 0.1 at a minimum and 0.2 at a maximum. I plug that number into the crop coefficient for my Rachio advanced settings each month.

I would set your crop coefficient between 0.58 - 0.68 for June-July based on the chart below.

He’s in the valley.

I’m still holding off passing judgment on the dynamic Kc’s just yet. They bumped to .72 this month, and that really isn’t TOO far off of the recomended Kc value for “Good” turf. Obviously, if you wanted to maximize water savings (which I know is your main goal) then yes, it might be on the high side.

Great stuff. With all of these numbers, I now have a better idea of about how much Rachio should be watering per week if set to Flex daily. I also just read this. This is the company I got my sod from. Question, when he says, "If the ET for three combined days was .75 inches, you would need to replace 60% or .45 inches of water.:

Finally, the highest priority isn’t to use as little water as possible, but just to not waste any water. I guess this is a fairly grey area since there’s a fairly large range of inches of water per week and how it relates to turf quality. I paid a lot of money last spring for a good sprinkler system and sod so believe me, I care about what it looks like*. We have about 2000 sq ft of grass, mostly because of all of our dogs. We can’t really walk 4 dogs and the best way to make sure they get good exercise is to play ball in the backyard.

We also have a large veggie garden and have planted 4 fruit trees. So yeah, trying to optimize water usage since I’m sure in the upcoming years it will start costing a lot more.

And I’ve gone a bit lawn nerd, I have a robot mower for mid week mowing (since I work) and bought a fancy California Trimmer reel mower too. I’ve got a lot invested in this blessed yard, lol.

Water restrictions and turfgrass, what you didn't know about the link between energy and converting to desert landscape in Arizona and California.

This is another chart I dug up years ago from The University of Arizona Ag department, which is what I kind of used to manually adjust my Kc values (which I typically only adjusted a couple times a year. My attempt was to mirror the weekly water amount to achieve a “high” quality turf. I do have two Rachio units on my property, and I have one running dynamic Kc, and one running my normal manual adjustments. So far, the dynamic is running a bit ahead, and will put down from 1.6"-2.3" per week depending on how often it runs. Depending on the schedule, it sometimes will run as little as 2 times in a week, up to 4 times. My manually adjusted is sitting right at 1.52"-1.9 depending on frequency of a given week. 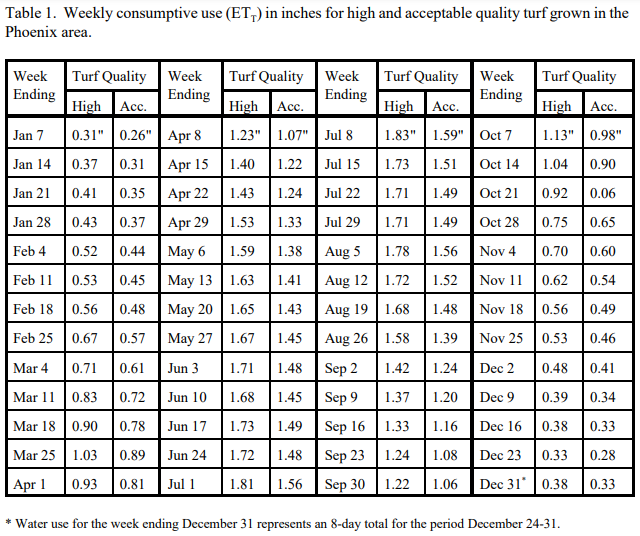 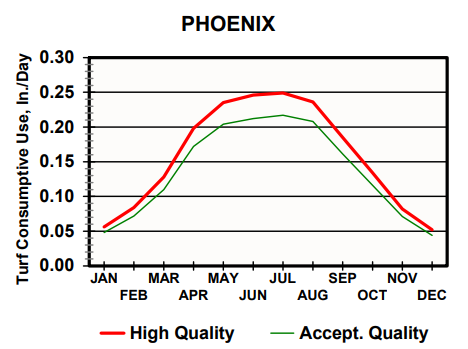 Hah, I downloaded and read that PDF yesterday. Learned a lot and it helped me to pick the numbers when I setup my Fixed schedule yesterday. Good stuff. I guess my initial instinct to is run between the two numbers, leaning slightly towards acceptable. I suppose the next thing to do is figure out how much water I’d be saving by not choosing high turf quality. It may be much less than I think and I’m wasting time trying to save just a little bit of water per week.

Not a massive savings in the long run, IMHO…based on my water rates in Gilbert, I think that would save me less than $6 a month.

The Urban Heat Island Effect is exactly why I am strongly against artificial turf. The real reason for wasted water is not a lawn, but incorrectly watering a lawn. That is why a smart controller, such as Rachio is so important.

I usually keep my lawn between the Good and Acceptable range.

That is why a smart controller, such as Rachio is so important.

I have a couple rental homes here in the valley, and had one of the neighbors text me that the wall between the properties was saturated, and they thought there was a leak. Sure enough, there was a massive leak in the poly drip line, and the renters never noticed, or mentioned anything. Glad I don’t pay that water bill!

Indeed, but I can’t do anything about the rest of the world’s water usage. Just want to make sure I’m not wasting any.

We too have stupid neighbors that water their walls - you can see it on our side of the block walls. Ugh.

I have that issues too. The neighbor to west has water oozing under the wall and it comes out my side. I know it’s not me, as my poly line is not there and it happens randomly when I haven’t watered for days. His yard is higher on his side of the wall.

I’m considering swapping out some of the emitters to lower gpm along the west wall, as my neighbor is watering those trees for me.