With all due respect, their priorities are spot-on. Spring is when people fire up their irrigation systems again and purchase new/replacement controllers. Think about it. You’re asking Rachio to stop innovating (and ultimately lose sales/market share) a few weeks ahead of the busiest time of the year just so you can ask Siri to water the lawn or see your zones in the Home app.

And I completely disagree; I think they have more responsibility to address the issues their existing and new customers will face than develop new features. I’d even argue that just fixing this issue will do more for their future customers than any new features I can think of.

I want HomeKit to work correctly as much as you do but seriously, they almost have this solved.

Agreed; they are very close, and taking resources away from that effor to develop new features is absurd.

I get the spring is coming and they need to make flashy announcement over the product to boos sales in the best season.

But the problem at hands is that they already make the same flashy announcements and didn’t deliver. In fact many can argue that this is false advertising.

They are basically saying that we already sold you…I get we lie…now, we need you to wait…we want to lie to some more people (because they didn’t take the Homekit capabilities from the advertising)

When it comes to Rachio and HomeKit, I’d recommend patience. They are clearly committed to solving this problem. Do you want something rushed and half-baked or something that works correctly?

I have been very patient. Just look through this post and you will see posts from me defending Rachio. Search this forum for the very first ever mention of HomeKit. Wait, let me save you some time, its here. That post is from June of 2014, by me! My first Rachio, I pre-ordered months before the v1 even shipped. I am 100% committed to Rachio but this is not a good direction. The updates have been like pulling teeth, after having solid weekly updates. My read of @franz’s recent update is, “yea we are not working on it anymore because we need to get the spring update ready”. I am not alone given some of the comments after mine. I was not happy but gave them to benefit of the doubt, at least they were communicating unlike others (yes, Ring I am looking at you!). Rachio committed to offering HomeKit support, sold me a product with HomeKit and its not working. How old is this post? How long did it take Rachio to even confirm/acknowledge this was a problem? I don’t need or want new features, I want the ones I was sold to work, then we can talk about new features.

I’m going to outright question your priorities here: Rachio should absolutely not be working on “new features” when there is this large of an issue in your system, especially since by your own admission the effort towards those features are detracting from the work on resolving the issues.

Most of us (last summer/fall) were hoping by Spring 2021, we would have HomeKit working on the controller…

I’m not certain that it’s worth getting so excited about the lack of HomeKit support - yeah, it’ll be nice to have it when it’s there, but it doesn’t actually get you that much. In reality it’s not going to be your go-to feature on the Home app, unless you have some unusual circumstances. Yes, I paid for HomeKit integration, yes I want HomeKit integration, but yes, I don’t want a half-baked solution. I would much rather Rachio spend time getting it right, and that might actually mean just one engineer, in a corner, just plugging away at testing and fixing, testing and fixing, testing and fixing for months. Sometimes you can’t divide a job up amongst a large team to get it done quickly, for example, can nine women produce a baby in a month? Cut Rachio some slack - they have multiple requirements, a major one of which is to keep the lights on, which means more sales, so more features to attract customers. It’s an evolving market place, and to stand still is to fall behind.

Be careful, I have said that HomeKit support is not all that… It gives you very basic function and nowhere near as granular and as fantastic as within the Rachio app. I got scolded, my hands slapped and told differently!

Now, having had freezing temps, no power or water for one week I can tell you definitively that HomeKit support is something I could care less about… HAHAHAHA

Ya gotta laugh… It’s hard but ya gotta

So HomeKit support is for more than just turning on my sprinklers.

This is just getting worse and worse.
Now I’m getting a notice that there is an update available but doesn’t seem to be a way to update it.

Also I can’t seem to get it to reconnect to HomeKit.

Tzterri, I wrote “Unless you have some unusual circumstances” - and you most definitely have those unusual circumstances, I agree. Tell me more about this bird enclosure - I’m imagining a wire mesh-covered cage the size of a small shed with a boxed-in section at one end and a population of Zebra finches or something living in it, so what on earth would you use to effectively heat it?!

It’s 8’ x 6’ x 4’ and here’s a picture of it from the camera that watches over it. It has three large rescue parrots in It.

I have blankets on it right now to keep the birds warm and there is a 1500 Watt heater located at one end of it. If temps drop below 68˚F the heater comes on. If temps go below 59˚ I seal the whole encloser with the blankets. 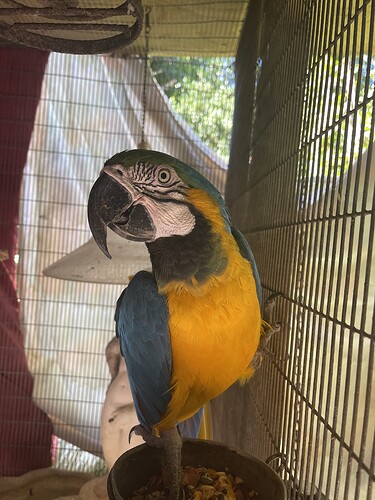 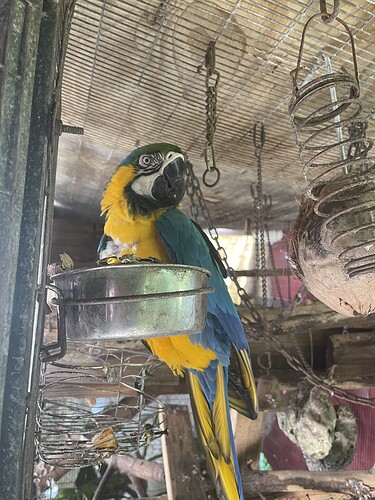 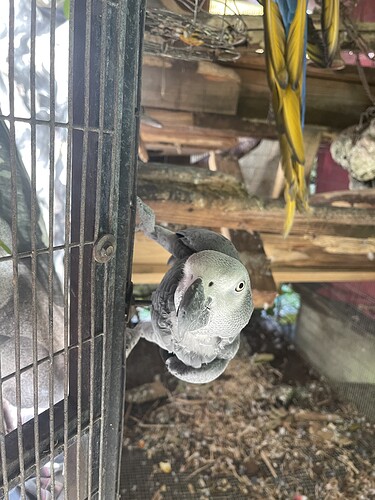 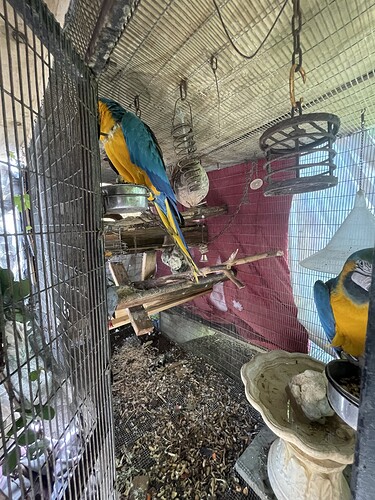 Yeah, like I said, everything in my house is HomeKit compatible but for those folks who are losing sleep over it not working, you’re going to be very disappointed when it’s online. You essentially get a switch to turn each zone on/off with no control over how long. That’s it. Mine is working now and I STILL go to the Rachio app for manual control. I’m sure HomeKit will evolve and add functionality but at the moment, you’re not gaining anything really.

Hmmmm…,
The link to these forums has been removed from the rachio iOS app. I had to go digging through my safari history to find the forums.

@Tzterri - the link to this specific thread or the Community as a whole?

This is what I get even I click on help in the app.

Pinged our iOS team to look into. Likely just a bug or mistake - nothing intentional

Good to know! thanks for the insight.

We recently did a migration of our help center tool and that seems to have reconfigured a few things, including how the community appears. I’m having the team look into getting ease of access to the community readded, but don’t have a solution at the moment.

iPhones, iPads, HomePods, and AppleTVs tend to default to 5ghz.

So… 2 devices “on the same network” are actually on 2 different networks, which are blended together by your router to allow you to hop from one to the other blah blah blah

SOLUTION: I have an AppleTV connected to Ethernet and configured as Home Hub and my Homekit performance is ROCK SOLID.

@Robchio, the real breakthrough is your username. That’s gold!