Rachio 3 and the flow sensor

I’m paranoid about leaks (big lot with a lot of piping and sprinklers) and want to upgrade to Rachio 3 with the wireless flow meter. Here’s what my backflow preventer installation looks like 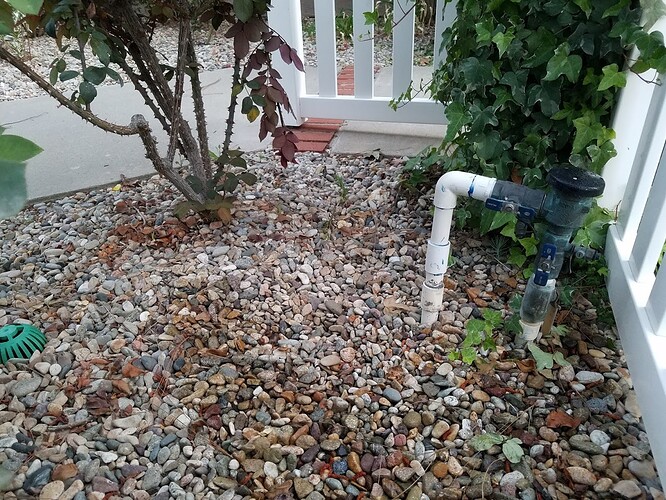 There isn’t enough clearance to install the flow meter. Is an underground installation an option here or do I need to raise the backflow preventer?

Unfortunately, I do not have a flow meter nor a master valve. I really did not know the valve of them until later. My understanding is that you can put the flow meter underground, but I would probably rather have it inside a box. I would also prefer to have it inside a box instead of even above ground. No matter what, I am a big fan of manifolds, which make life easier should a valve, meter, backflow preventer, or something similar need to be replaced (instead of cutting pipes and possibly putting on a coupler, etc.).

I am interested in hearing what others have to say too.

From a technical standpoint, raising the backflow preventer looks easy. There appears to be a threaded nipple between the two ball valves on the inlet side; just replace that with a longer nipple.

However, if you want to avoid that for aesthetic reasons, be aware that burying the flow meter will hamper RF transmission. If the controller is more than e.g. 50 feet away, I suggest testing for reliable transmission before committing to buried installation. Also, you need to provide sufficient clearance for replacing the batteries and viewing the status light.

with the wireless flow meter

The wireless flow meter has been discontinued:

Yes, that product has been discontinued.

While the wireless flow meter is discontinued, there are a lot of wired options that you can do, and underground wouldn’t be an issue with those.

Oh, I didn’t realize the wireless meter is no longer available. Thanks @ritchierich.

Thanks, Stewart. Your comment is very helpful even for wired options.

While the Rachio flowmeter was discontinued, it is still available with Ewing Irrigation as a special order.

Not sure how, Rachio doesn’t have them anymore.

I actually installed a “Flume” wireless flow meter on my water meter. I can monitor house water, and my irrigation as I usually water night/early morning when the only water running are my sprinklers.

There are RUMORS that the company that manufactured the Rachio wireless flow meter is coming out with their own. I loved my Rachio wireless meter but it split during the recent Texas mega freeze! I was lucky enough to have installed a duplicate unused cable when I originally installed my irrigation system ( well worth the small added cost). I replaced the broken wireless with a Everydrop 1004-EX ( one of the ones recommended by Rachio in their “Wired flow sensor compatibility and installation” guide). BTW: to my eye, based on design and form factor, I am guessing Everydrop is the company that manufactured the Rachio Wireless . If you can’t wait for a POSSIBLE new wireless version (somebody is bound to come out with one) the by the looks from your photo you might consider just stringing some new cable for a soured version. Either hugging the house’s foundation or up the side of the house and under the eve or through the attic.

A (reliable) wireless meter would be so much more convenient. The main backflow preventer isn’t sitting next to the house. It’s only about 10 feet from the front wall, but across the front yard walkway (you can see it on the image). Nothing impossible, but I’d rather not deal with running the cable under the concrete. Though, come to think of it, right nearby are the front yard solenoids, so there must already be a wire conduit running under the walkway (the irrigation system was installed by the previous owner). I should check if there is extra space.

I actually accidentally stumbled across Flume just the other day. It sounds quite awesome, but is unfortunately incompatible with my iPearl water meter (for some reason, of all the neighboring houses I’m the only one who’s got a digital meter, lucky me). Apparently that thing already supports remote access and I’m now trying to figure out if only the city can access it or mere mortal owners can as well.

Many years ago I purchased an iPearl digital water meter for personal use. I bought the iPearl brand on the recommendation of our city water manager. I use it on my irrigation branch. But it (my model) is not wireless, although, as I remember, with the right ($$$) portable professional equipment you can record a reading using the portable equipment’s proximity sensor. I would periodically log the iPearl readings in a spreadsheet and monitor for abnormal usage to signal a leak in my very finicky large drip system. I bought a Rachio controller with wireless water meter to replace the tedious manual logging. As I mentioned my wireless Rachio split after freezing and I replaced it with the wired Everydrop. Glad I did since I’ve had several leaks pop up (due mainly to the unusually hard freeze) so I’m glad I have the leak alerts from Rachio. BTW: I still occasionally check my iPearl and there is a pretty consistent 3% discrepancy between it and the Everydrop. No biggie, but someday I’ll look into calibrating and syncing them.

I was wondering about this too. There is a spot near the house in the rocks that is wet 24/7 in the rocks. It’s where several pipes connect There is not much of a pool of water and the lawn is only a foot away and is not wet. I’m assuming it’s a very small leak.