It stopped raining 2 hours ago. My zones are up to date 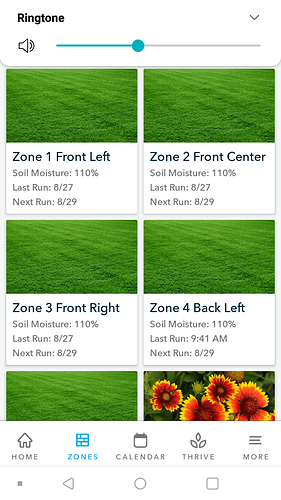 But yet my schedule calendar still shows a watering session tomorrow morning. 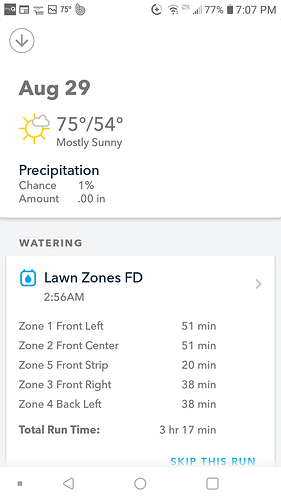 Is this the case where the left hand doesnt know what the right hand is doing? I will have to remember to check the schedule tonight to see if rachio cancels the water session for tomorrow.

Flex daily schedules re-calculate every day at midnight if a zone needs to be watered that day.

It is possible that it will check the soil moisture a little before the schedule is supposed to start to decide if it will skip or not. If I remember correctly, I have seen this with a wind skip and then when it got even closer, it decided that the wind was not so bad. I guess we will see as it gets closer.

Sometimes schedules don’t update, or so it seems. Maybe open the schedule, drag down from the top (to update), check it again? Could we see a graph or chart for one of the zones with your current conditions?

I did the refresh a few times just to make sure but it did not change. I just happen to wake up at 2 a.m. and checked the schedule. Rachio did adjust the watering sessions by skipping to Monday so thats good. I will question it less going forward noe but it is so weird that one part of the system (moisture) get updated real time while another part doesnt seem to adjust. So what happen if I had the watering scheduled before midnight (after sunset)? Since Rachio does not update until midnight as someone said, would it have still watered?

Your questions are good. You learn because we share information and if there isn’t an acceptable answer then we point it out to Rachio.

My understanding is Rachio re-evaluates if it should water at midnight and an hour before watering.

My understanding is Rachio re-evaluates if it should water at midnight and an hour before watering.

@jtuber @NCSuggs Yes, that’s my understanding also. Rachio evaluates the weather/precipitation at midnight and then again an hour before a schedule is supposed to run. In between, when the data doesn’t seem to match we have to trust that Rachio will re-evaluate - for me that took a bit of time

Sometimes I think the Rachio is smarter than me (thank goodness). My system was supposed to water today. Yesterday early on, it said it was going to. Then last night, before bed, it said it wouldn’t. Even though the moisture was going to be BELOW zero (okay, the calculations would show that, but Rachio bottoms out at zero). I couldn’t figure out what was going on; no real rain was expected (like 0.01"). Woke up at 4 AM (my system starts at 5 AM), and checked again. Same thing. Finally I hit upon the message that a Wind Skip would occur. Ahah! Sure enough, checking Weather Underground showed winds approaching 15 mph. It showed about 12 at the moment, but I was only reading 4-6 (we’re protected a lot by trees). So, I manually ran a fixed program I have that applied 0.1" to all zones. Probably going to do another one later, to get it through the day, then it can do its thing again tomorrow.

Something in the way of a New Suggestion I thought of, during this: When, for whatever reason, a zone goes BELOW zero water, I think it should show as a negative. We know that using a 50% Allowed Depletion, there’s still water left in the zone. But less now, as some of that has dried out. Therefore, it should take more water fo “fill” the zone up again. Rachio allows 110% water max, to allow I guess for some puddling and surface water surplus, figuring the rest will run off. I think they should go negative to allow for drying beyond the AD. Although at that point, it might make more sense to show TOTAL moisture %, 100% when completely filled, 0% when bone dry to the roots (should never get there), 50% when at the 50% AD.

When, for whatever reason, a zone goes BELOW zero water, I think it should show as a negative. We know that using a 50% Allowed Depletion, there’s still water left in the zone. But less now, as some of that has dried out. Therefore, it should take more water fo “fill” the zone up again.

I sure agree with this. I haven’t had the problem this year, but some summers we have a rain forecast EVERY afternoon AND they are often scattered, meaning I don’t get rain. Then it happens the next day and the next day. Eventually the forecast gets low enough that the system will kick in. But in the meantime, I have to go in and do manual waterings to keep things from dying. (I don’t worry about my lawn, but my annuals and perennials). It’s not Rachio’s fault. They are at the mercy of the data they are being fed from the weather forecasters. But I really do like your solution of tracking the “negative” amount and doing a catch-up to refill the bucket again when that happens.

This year I’ve actually had the problem the other way. My soil has had so much rain for days that it gets supersaturated. Luckily I have a rain sensor and it seems to work better with supersaturation than the Rachio calculations and will stop my system from watering even when Rachio wants to. The max used to be capped at 120% and a couple years back they lowered it to 110% because the 120% was too high. I know that @franz in the past has said this is something he wants to work on.

Rraisley you should have left it alone to see if rachio scheduled a makeup water session. About the moisture level would rachios makeup session run longer to compensate for the missing day?

I didn’t want to stress the lawn. Plus, I could see where it bottomed out at zero, even though it should have been about negative 01". I don’t think Rachio ever schedules longer runs, except possibly when Flex Daily first starts up, but not even sure of it then.