This time I plugged in the new power adapter and no controller to avoid damaging the new controller. Same thing it smoked up. I unplugged it and took it to another outlet and no go. Does not power up controller

I noticed power adapter is input 120 and out put 24. I found a power adapter input 100-240 and output 12v and that powered up controller and worked in out door enclosure . Got controller online and registered but doesn’t not power up pump. I’m assuming Because output 12v

Tech support said they don’t have any other power adapters and that i should try finding one on my own.

Has anyone come across this issue where power adapter does not work for with outdoor enclosure ?

The issue is that your existing wiring is 240VAC, that’s why it has fried two supplies and your first controller. The issue with the 12V supply you’ve found, is that it is 12VDC (not AC), meaning that while it may provide enough power to power up the controller itself, it will not work, because the Rachio controller is designed to work with AC supplies, thus using it with a DC supply would cause the output to be turned ON, but fail to turn back off (regardless of DC voltage).

AC supplies are not, inherently, universal. Meaning that you either have to use 120V or 240V version. Finding a 240V supply with 24VAC output will be tough. You are likely better off hiring someone to run a neutral to your Rachio supply, in order to create a 120V socket, or use a GND wire (if you have one) in lieu of neutral. Mo matter what you choose, buy a multimeter to make sure the socket is at 120V next time you try to plug in the supply.

As @Gene mentioned, before doing anything, I would test or have tested that outlet to see what voltage it is. It would seem odd to me if it were 240VAC with a 120VAC outlet.

Here is my setup 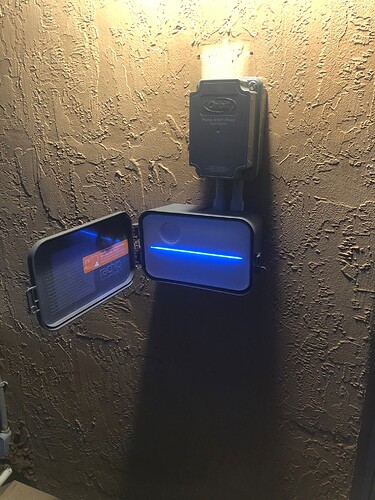 There was two wires as power in and two wires out to pump from the old intermatic timer. I replaced it with a pump relay and connect the enclosure power wires to the two power cables that are also connected to the pump relay

So because of no neutral or ground the out door enclosure power will not work for me ? There was no previous outlet here

I would try following the wires, is there anything visible on the other side of the wall? Hopefully it is a garage. You’ll likely end up needing a 220 to 110v adapter, or a 24vac supply from Europe to work with your setup without running a new wire.

Possibly something like
https://www.amazon.com/Control-Transformer-Primary-Secondary-Furnace/dp/B07RDBS6NK/
if you know how to install it safely.

Yes, this is an option. It is a little harder to work with these, as you’d need to cut and attach the plug from the burnout supply only the secondary coil of this transformer.

Whatever you do, DO NOT use the 24VAC terminals on the Rachio as a power input. These do not have the current carrying capacity to properly power the controller & the sprinkler valves. Only the original power input socket is rated for the full current load.

In residential environment, you are likely not on a three phase system (unless you are in a tall condo tower), meaning that you should use 240V (dual phase) tap, rather then 208 (found in three phase power).

Did you check the supply voltage of the outlet? It sounds like the outlet voltage may be 220 - 240V whereas the Rachio adapter / controller was designed to work on 110 -120V AC / 24V DC rather than 240V AC/ 12V DC and you may be risking damage to your controller.

If it helps, I installed a Rachio 2 in my house in Spain about 3 years ago and I have had no problems at all (with the electrical supply, anyway!).

Mine is fitted outside so in the Rachio 2 outside enclosure which is big enough to fit a UK power supply plugged into a trailing socket behind the Rachio 2. The trailing socket has a EU plug on the other end that plugs into the outside power socket.

Here are the links to the power supply I have used (twice, one in UK as well) and also the trailing socket .

Alternatively you could search for a suitable power supply with an EU plug, but would you want to plug that directly into an outside socket?

NOTE: You need a power adaptor that outputs 24v AC (alternating current) and not DC (direct current) as suggested by ich1ban!

I have an 240VAC input power and had the same issue. I was able to source a 24VAC 1.0Amp output transformer from Australia via Internet purchase. 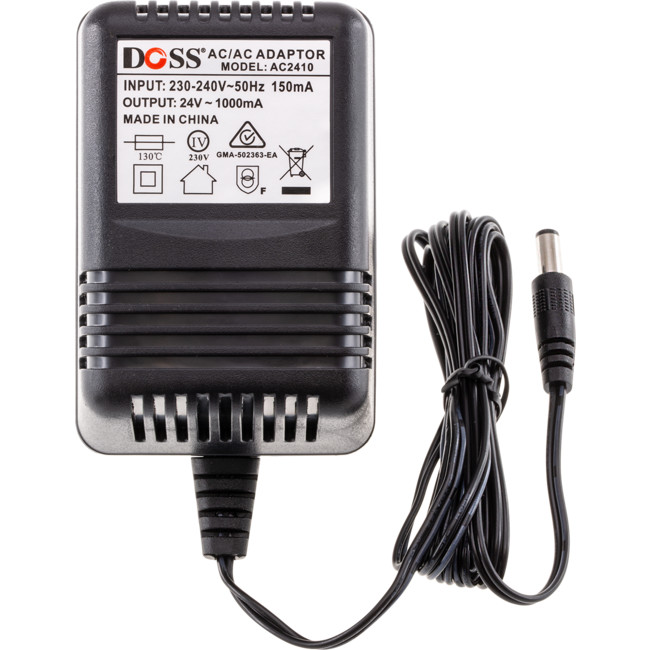 Do Seasonal Adjust and hyperlocal weather work in NZ/AUS?