I’ve been quite happy with my Rachio for the past two years. However I’ve noticed I’m always watering every day on Flex Daily right now and it is not even close to mid summer. So to me that means that either I’ve got something wrong for over watering, or I’ve messed up and can’t get enough water down when it is hotter.

I was thinking about this today and realized when I did my cup test I ran one zone at a time and came up with .6"/hr. However the system I have has head-to-head coverage with 180 degree rotors on each boundary so there are no areas that don’t have coverage as part of 2 zones…or at least very limited little triangles that only get one zone coverage.

With that in mind, I’m thinking that I’m seriously over watering as I’m saying each zone runs 6, so in a week it would need to run almost 2 hours. However if the ground is covered by two heads each doing .6 then am I not WAY over-watering?

If your coverage is that bang on, maybe a catch cup test with overlapping zones being run is the way to go.

I can try that tomorrow, for some reason the logic is just not adding up to me.

What I want to say is: “If I catch-cup one spot and run the two zones I will get 2x what I got for one, so I should double the inches per hour for all zones.” But there is a nagging feeling that I’m not accounting for something

Good chance it’ll be double. But you’re testing to confirm! (Does that make you feel better?)

I’m a bit surprised that each area is covered by another zone as well - but I’m having difficulty imagining what your yard looks like.

Here are the 6 zones of my front yard. 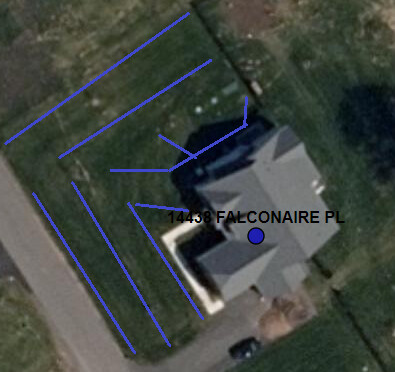 You’re absolutely right. You have to catch cup test the “target” zone in addition to any other zones that also overlap with it.
Here’s the reason I was told.
The spray default or rotor default in Rachio of about 1.5 to 1.0 in/hr nozzle rate, is a nozzle rate calculated with head to head coverage.
It’s the same if you were to look at nozzle specs on RainBird or Hunter’s sites. In fact, they even show different rates for square and triangular head spacing.
The perfect example is in my own yard.
I have a zone with spray nozzles rated at 1.5in/hr.
After my catch cup test, that’s about what they came out to be, in square spacing in my parkway.
BUT, on the side of my house where the same heads/nozzles are spaced in a triangle pattern, the catch cup test showed a precipitation of 1.85in/hr.
It gets dicier in my backyard that has 4 zones of spray heads, in a triangular pattern.
When catch-cupping those zones, (tonight actually, talk about timeliness) and taking cup readings after running 1 zone, the precipitation rate was way off from observation. When I also ran the adjacent zone to get the “target zone” cup readings, then the numbers fell into place and gave me a very sane run time in my Rachio schedule of 14min. If I didn’t run the overlapping zones, I’d get spray head run times of 30+ minutes, which would be a biblical flood in practice.
When you have that many overlapping zones, yes indeed, the catch cup test becomes a daunting game of round-robbin. But it’s how you’ll get the accurate numbers you need.

What gets me is that flex daily looks at zones independently. So if zone 1 is thirsty only zone 1 runs. But everything is thrown off if … we need zone 1 and zone 2 to run to get the right amount of water down. ack!

Edit: Thought about your situation a bit more and I suspect all zones / most zones will need to run at the same time (because AD has been reached at the same time). I have some zones that are shaded while others get full sun so my zones run at different times (like today where my shaded backyard did not run, but my full sun front yard did).

Hi NC,
Your edit read my mind.
I’m not a power user, but I believe that is correct.
I’ll give a scenario from my yard.
My back yard has 4 spray zones linear with eachother. The outer zones are sunny and have a lower precip rate, so they’ll run longer.
My central zones are full circle sprays, in some shade, so they’ll run shorter. All zones have min. 80% overlap.
I’m expecting over time, the zones with common characteristics will run more frequent and longer, out of phase with my central zones. And that may be ok because they’re more shady, they put water down faster, and when either set of zones runs based on MAD, almost every zone will get some water.
I’m new to this also, so if I see things slipping out of whack, i might need to empty a couple zones to re-synchronize things.
Time will tell. The season is early, my zone buckets are still stabilizing.

However if the ground is covered by two heads each doing .6 then am I not WAY over-watering?

I think this depends a lot on where you put your catch cups. Which is why I’m not quite as much a fan of catch cups. And it is very true that with your layout, you’re getting a LOT of overlap, which is good but hard to measure. But here’s a thought, using catch cups, that might work out for you:

How about trying doing a catch cup for each zone, but put the catch cups ALONG THE LINE of sprinklers. Not right next to the sprinklers, but a few feet away, and all along the line, in between them. This should give you a good idea of what the actual flow is at that point, because I doubt there will be much overlap from the adjacent row that far away. So that gives you a good flow rate there, and then you just kinda depend that between rows, as water from one row decreases, water from the other row increases. I really think this will give you some decent results that you can use.

One of the problems with a setup like you have is that quite often the same sprinkler head is used in all locations, but some are set at 180 degrees, the center row at 360 degrees. Meaning, depending on the head type, you can get only half the flow per square foot from the one with 360 degrees, because it has to cover twice the area. Therefore, it is quite common for the center row to have to run up to twice as long, and have a Nozzle Inches per hour half as much, as outer rows.

Anyhow, I think that would be a fairly easy test to do that would get you in the ballpark pretty quickly.