We had a major freeze here in south Texas and after that is when it started saying low flow on just one zone. My backflow cracked as well and I just had it replaced today.

The repair person looked at the zone with low flow and said it looks good on the surface. The water is coming out OK. All other zones I ran are not reporting any issues.

Any idea what could be causing the low flow notification at this point?
Visually, the water is coming out of the sprinklers same as before. However the last time calibration was done it was set at 3.9 gpm - now its saying 1.0 but few times it said 0.0 and 0.3 which is impossible since water was coming out just fine.

I am guessing if there was a leak then I should be getting a high flow notification - correct?
If yes, and the zone appears to work just fine I will just recalibrate it and leave it as-is.

Are you using a wireless flow meter version? If so the batteries may have been effected by the cold & you are getting an unreliable radio signal (thus lower then expected reading). See if fresh batteries will resolve the issue.

After looking it at it further, I think it’s a valve issue on that one particular zone. I saw that some rotors in that zone were trickling water even when it was off. So I am guessing the valve isn’t opening/closing properly.

I have asked my sprinkler repair guy I use to come check it out. I’m not sure how to fix it myself. It’s a Rainbird valve. Looks like this from the top except all dirty and muddy…can’t tell what goes where 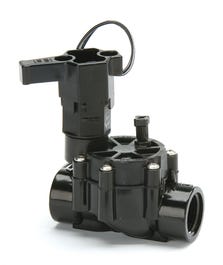