Recently purchased a Rachio 3 12 zone sprinkler controller to replace my Hunter SRC plus controller. The previous owner wired up the Hunter SRC plus controller (see attached picture) and it was functioning fine.
The Hunter SRC plus had 2 wires on the C terminal. I moved those two wires to two C terminals in the Rachio 3, and I got the error message Zone fault detected on Rachio when I tried to test the zones. When I moved the black wire to the M terminal and tried to test the zone, the error message didn’t appear but the zone didn’t turn on either. When I moved the orange wire to the M terminal, the error message appeared again.
I’m on city water, so I don’t think I have a master pump or master valve. I turned that setting off in the app and still nothing worked.
I checked all of the topics here and couldn’t find an answer to my dilemma. Any help you can provide is greatly appreciated!

@joelthompson009, it looks like the black wire is most likely the common and the orange and brown are going to a rain sensor. If you could also post a picture of the Rachio wiring that might be helpful as well. The two wire going to the 24 VAC are not required in the Rachio, you should be able to follow those down to a transformer and unplug. 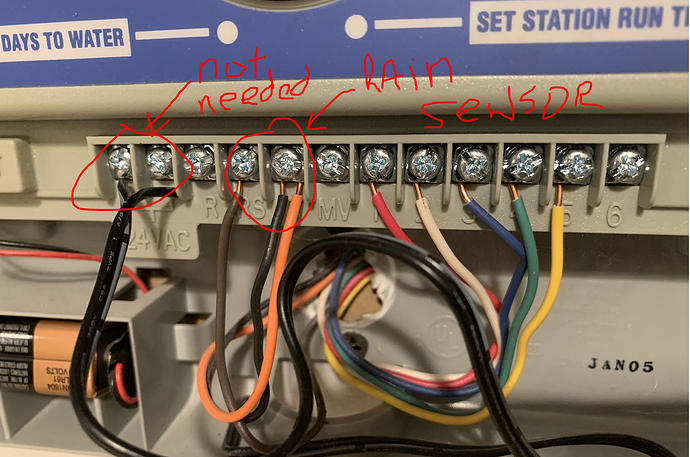 @gaustin Removing the orange and brown wires from the Rachio 3 fixed the issue.
Thanks for the help!
Joel