How to set up this half shady / half sunny blobby zone?

So we just had irrigation trenched and sod laid around our pool this past spring. It’s a blobby pool, so the sod area is super odd shaped and narrow at parts. Unfortunately, I didn’t know much about irrigation design then, so I let the guy do whatever he thought was best. First red flag that I ignored was I told him I wanted PRS30/40 heads with MP Rotators since that’s what I have in the rest of my lawn. He said wanted to put Rainbird sprays in that he got on sale at Home Depot. I figured whatever, I can just swap them out later. Mistake.

He ended up putting the heads too far apart at a couple spots, so he had to use nozzles with a huge radius to get head-to-head coverage. Unfortunately, it ended up over-spraying into the pool a ton. Which, one, is a waste of water, and two, it dilutes my salt and cyanuric acid, which makes me spend more on pool chemicals. Especially over the summer when this zone irrigates just about every other day.

Anyway, I’ve spent like the past month pouring over Hunter MP Rotator spec sheets trying to figure out how the heck to irrigate this odd-shaped area of sod, which has portions that get a ton of shade over the course of the day, and also has portions that gets nuked by the sun for 10+ hours a day. I live in Northern CA, so it’s been 100-110 for the past 4-5 weeks, and I’ve had spots of the turf dry out and go dormant, while the shaded spots are still growing like crazy, but the soil is constantly moist and never dries out at all.

Here’s what I’m working with. Keep in mind this was hand-drawn on the computer, so the distances are definitely not drawn to scale. 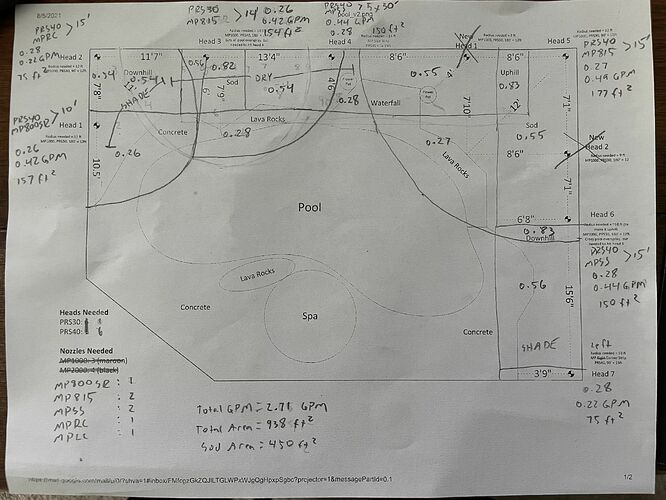 Basically, the upper left is shaded very well under a massive oak. Right next to it gets toasted by the sun most of the day, while the spots on the right side are shaded by a giant redwood and my fence and get a low to medium amount of sun a day.

I’ve been trying to put higher PR nozzles (MP815, MP800SR, MP Side Strip, MP [Right/Left] Corner) with more overlap on the sunny portions, while trying to cut down on the PR in the shaded zones to sort of even it out. The heads/nozzles indicated in pencil are the ones I’m actually using. The printed ones were the ones I had in there previously, which resulted in a bunch of pool over-spray.

I did a catch cup test and I got some pretty wild up results that I wasn’t expecting: 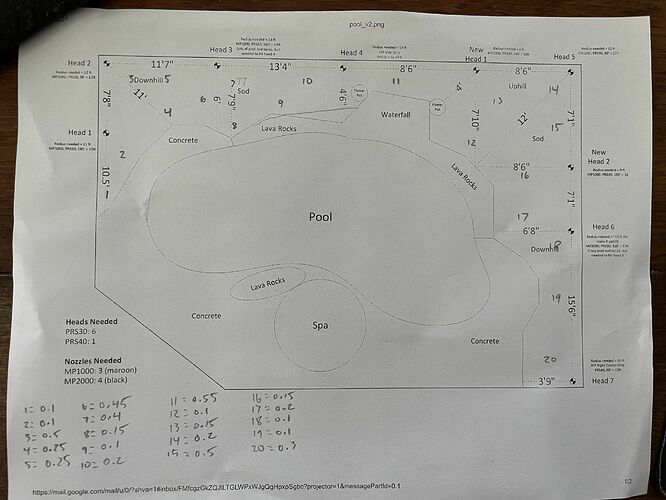 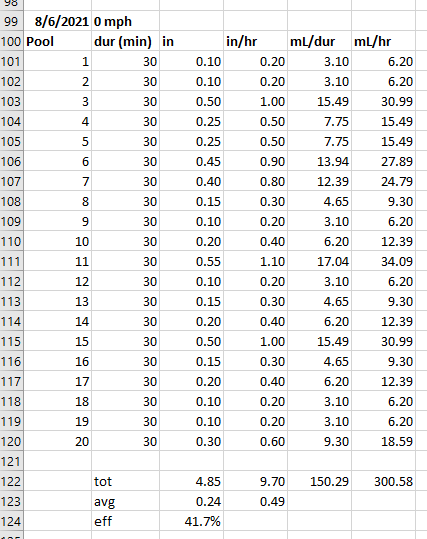 My previous average PR was 0.46 using all nozzles with the same PR, so barely having it be higher is a bit strange to me. I expected something around 0.6+ish by adding a bunch of higher PR nozzles (MP815, MP800SR, MPSS, MP Corners).

The efficiency is super low due to me trying to mix PR nozzles on purpose to overcome the shaded/sunny areas on the same valve dilemma, so I’m not worried about this number.

But I suppose the question is, what do I enter in the zone settings since I’m purposely mismatching PR nozzles? I put in the average PR, but do I want to enter the really low efficiency? I don’t exactly want it dumping tons of water on the shaded parts just to make up for the higher cup values. I’m not sure what amount of shade to tell it either.

My old PR was 0.46 with an efficiency of 74%, and the runtime was 1h13m.
With these new values, it bumped it up to 1h30m, which seems like a TON of water since most of these nozzles are putting out double the PR of my old ones.

I’m not going to have a lot of answers. Differing water requirements over a single zone has been, and always will be, a problem. The only real solution is redesigning and reconfiguring the irrigation system to eliminate or reduce the problem. You’ve outlined most of the causes of this problem:

All of these cause uneven watering, and unless they can be prevented by eliminating them, you end up with a problem. How bad the problem is will determine if you can live with it or need to redesign.

The bottom line is that differing water requirements or differing water applied to areas results in some areas having too little water, and others too much. Mostly, you have to live with it. Efficiency helps correct the problem (my measured efficiencies run from 24% to 74%), but just does it by overwatering the rest of the zone to provide somewhat more (but still not quite enough) water to the lowest areas.

The best you can do is strike an average. If some areas get soggy, you should cut back on the water. If other areas dry out and wilt, you have to increase the area. And if neither works, then you redesign.

Yeah, it’s unfortunate. All of my other zones have shady and sunny spots as well, but at least they aren’t super weird shaped like this area around the pool is. Which is causing a headache trying to find appropriate nozzles.

A redesign is definitely the best option, but trenching new PVC, wires, and adding more valves isn’t in the realm of consideration due to cost.

It’s definitely a tricky problem, but I’m trying my best to get extra water on the areas that need it the most by adding some higher PR nozzles.

I just wasn’t wasn’t sure whether to put in the actual average PR/efficiency or not.
If I bump the PR up to the real new average (I suspect it’s a bit higher than I recorded), it’ll water the shaded areas a bit less, which is good.
If I leave it alone, it should give the sunny areas more water, but the moisture levels and whatnot won’t be accurate to what actually happens, which means cycle and soak durations won’t be as accurate as well.

Hmm, if I enter the average PR/efficiency of my sunny areas (which should be higher PR, theoretically, with my nozzle layout), the cycle and soak should work fine since it thinks it’s laying down a greater amount of water.

So I’ve got 2.85 GPM going to this zone according to Hunter specs.

So yeah I think my catch cup test was a bit skewed to the lower PR areas.

Just gonna go with that and tinker the heck out of it til I get what I want, ha!