How to install wired flow sensor far from controller

I’ve had a wireless flow meter on my Rachio 3 which was working perfectly. Unfortunately, after extensive troubleshooting with tech support, it seems the flow meter is irretrievably malfunctioning. I am considering switching to a wired flow sensor, e.g. Everydrop 1004-EX. However, since we don’t have basements in South Texas, my water meter, and thus main irrigation line, is at the very front edge of our property, about 120 ft from the controller.

Any suggestions for installation of a wired flow sensor in this situation? Would the wires have to be run underground all the way from the flow sensor that would be near the water meter? Would that even work?

Unfortunately, it splits off right near the water meter. That is where my wireless meter is currently installed.

@babydoc - 120’ feet shouldn’t be a problem. Do use SHIELDED wire and not leftover sprinkler field wire that is unshielded.

Other than burying the wire, 120’ shouldn’t be much of a problem wired. I’m using a 1004-EX at about that distance. I think with the right signal cable (twisted pair, shielded sensor wire) you can go near 1000’ if necessary.

DIY Tip: To bury the cable yourself across a lawn, find a Wilton Trenching Spade. Miracle tool.

Cool tool, wish I knew about that sooner. How long can one go with unshielded before problems occur?

@babydoc , how did your flow meter fail ? I have one that seems impossible to calibrate anymore. Communicates with the controller and I can see it on with OK signal strength and battery, but during calibration, the numbers bounce around from 3gpm to 0 gpm. None of the 16 stations successfully calibrate. Similar for you ?

There was a time a couple years ago and several firmware revs back where it worked flawlessly.

It’s been a couple of months which is an eternity for my brain sometimes. If I recall correctly, the problem was just as you described. I figured it was a hardware problem (and Rachio support never suggested otherwise), but perhaps it was actually software.

Trying to decide what to do. My insurance company helped pay for a Phyn that was installed yesterday, but because of layout and the installer’s contract with the insurance company, the sprinkler feed was not included in that flowmeter install (insurance only cares about water going into house). I really did value the Rachio meter, and am not a candidate for a wired one - too many obstacles.

In my case, my original 1004-EX appeared to fail for one or all of three different reasons:
o improper signal wiring (shielding, untwisted, valve wire proximity) over 120’.
o insufficient back-pressure from meter to valve, which was downhill causing air (cavitation) across meter blade, sometimes at full flow, often at low flow.
o failure of Rachio signal handling to filter intermittent “zero” measurements from meter.

Should note that I returned first meter to EveryDrop, where they tested the meter as operating to specs. Second meter was installed coincident to above improvements. Happy now. Should note that I also installed “armored” version (7162D-A) of signal cable about 6-8" deep across lawn to the curb. Don’t need careless aerator trouble.

I’m not a candidate for the wired meter, but I understand that Rachio licensed the flow technology from EveryDrop, so it is interesting to hear this part. 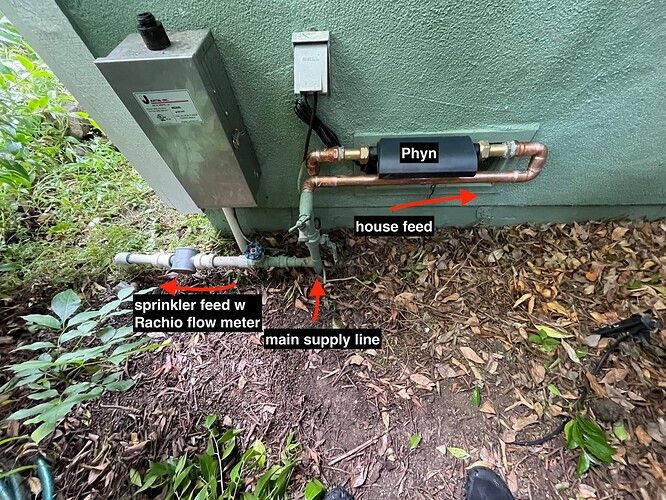 Is your suggestion adding another valve on the downstream side of the flow meter to increase back pressure ?

If your valves are lower than the flow meter, and you see spurious “0” readings on the meter flow while in operation, then yes, it’s possible a downstream gate valve might allow you to “tune” the back pressure at the sensor. (Note that the illustrations of the preferred mounting orientation of your meter was pointing it vertically up, then turning downward to the valves - probably to avoid air or cavitation at the meter. I haven’t seen Rachio meter instructions - just EveryDrop equivalents.) 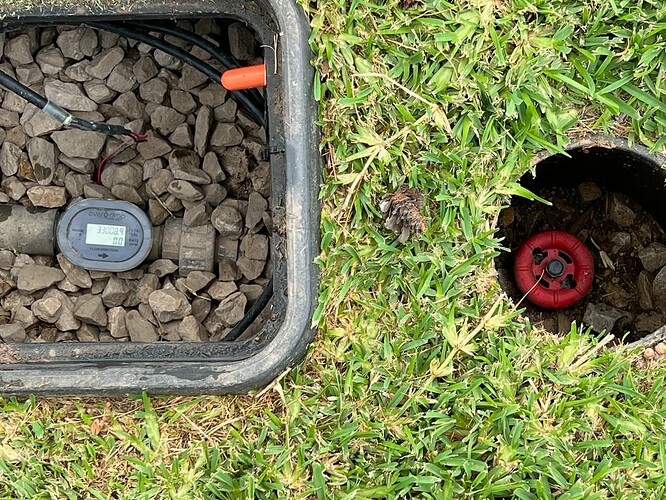 My photo shows a properly sized gate valve downstream of the EveryDrop. A gate valve has the ability to make very small aperture changes starting from “fully open”. If your downstream pipe is smaller than your inflow pipe, you might already be adding back pressure. If they’re the same size (3/4"), you could put a gate valve just past the meter or on the downward leg.

Downstream and upstream pipes are the same size, I think 3/4", so I might try extra valve approach. Also did as you suggested and changed the flow meter orientation to face up and saw better, but not completely consistent measurements during calibration. I had the flow meter flipped so I could replace the battery (I had to expose the back side).

You may know this from discussions on this forum, but flow below 1 GPM is right at the edge of measurement stability for one of these Rachio wireless units or the EveryDrop meter. It looks like you have drip stations with just a few emitters to have such a low flow (and calibration).

A downstream pressure adjustment may not have much effect at these very low flow rates. Nor probably, since you’re watering down near the sensitivity of the meter, will it add to the stability of your readings from the meter. But, of course, it might not hurt to try.

By “pointing upward” I didn’t mean the face of the meter points upward. I meant that the meter’s flow would be upward through the pipe, in the direction of the arrow shown on its dial (see my photo with arrow, but horizontal flow). Upward flow is against gravity, with bubbles tending upward with the flow. You would need plumbing change to accomplish that.

I’m interested in how you get it all to work… I have a single zone (of 8) with drip requirements that exhibits the same intermittent “stability” issues you’re seeing near the lower measurement limit specs of the meter.