Flow meter did not detect a leaking solenoid valve. :(

Just got a notice from the city about a slow leak and found one of the heads in the Backyard Section 1 leaking. Shouldn’t the flow meter detect this? That is one of the big reasons I got it.

How do I see the current flow from the meter?

Unfortunately few meters are capable of detecting slow leaks. In case you are talking about the flow meter that comes with Gen 3 Rachio controllers, the official range is 0.5 GPM to 25 GPM.

If you are interested in reducing the chance that such slow leak would effect you in the future, I would personally recommend you consider installing a master valve. This way, if similar leak ever develops on the primary (master) valve, chances of the pressure to the secondary (zone) valve being high enough to cause an actual loss are greatly reduced.

Glad to hear that your water company provides leak detection as well. They are good at detecting persistent water usage, no matter the size. Rachio’s flow meter is better designed to detect leaks your water company cannot, that is semi-random, inconsistent, flow usage of variable rates.

When you say a “head” was leaking, do you mean a sprinkler head that is flooding when the valve is on? If so, wouldn’t that imply the malfunction was in place when you calibrated the flow meter?

If so, fix the head and re-calibrate the flow meter
Or do you mean a sprinkler “valve” was leaking.

I am real curious as to how the city would detect either TBH, they would have to be able to monitor your meter in real time

around here, the water district can’t even read meters each month and deliver accurate bills.

They see the extra usage and the slow meter moment when they read the meter. So it’s been leaking for a time. Yes, water was leaking out the head because the “solenoid valve" was leaking. Everything was off but water was oozing out the sprinkler heads on the section.

That is too bad that the Rachio flow meter can’t see slow leaks. So it’s only helpful if a head is busted clean off and the flow changes radically. That has happened but I see that fairly quick. Oh well.

Again, it would be nice to see the flow reading. I’m guessing there is no way to do this. I’d really like to see what it is reading when it’s leaking.

Like Gene mentioned, it takes a much more expensive flow meter to detect slow leaks like that. Your water meter from the city can see it, but those aren’t sub $100 units either…

@Toy4Rick, many municipalities now have AMR/AMI technology in place and your meter can read in real time…

Would be nice to think that since we already pay some of the highest rates in the country, they could read our meters remotely but nah…

Ok, how about this one? Found this one last week, still no alarm. 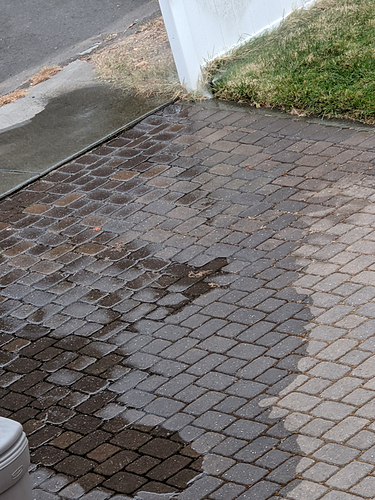