When I installed the Rachio Gen 3 I had extra positive/negative/ground wires from my old system. I thought it may had been for the old rain sensor. Basically all I did was plug in the appropriate zone wires and power wires. Everything worked so I left it at that (with the extra 3 wires not attached to anything). I began noticing a rumble when the sprinklers start up where as that never happened before. Could the excess wires been for something that I missed? Does a pump relay switch require power, maybe that’s what the wires are for? Can I just plug the wires with the existing power wires for the Rachio 3 and see what happens? Any suggestions are appreciated.

Do not plug in anything without knowing exactly what it is. You are likely to burn out your controller. Photos of you previous & current setup would go a long way to explaining what you are describing, so far it seems that wires were the power for previous controller and should be left disconnected.

I will upload the photos. They’re definitely not the power to the old unit as I’m using that to power the Rachio since the adapter that came with it was dead.

I hope you don’t have the power wires plugged into 24V + & - terminals, those are for output only, they cannot handle the full power the controller requires.

Well, I did. I received the new adapter from Rachio today and it’s working. I still have the extra wire issues. Photo from the old controller is attached. They were attached to REM, AC1, and AC2. I have no idea what’s that’s for. 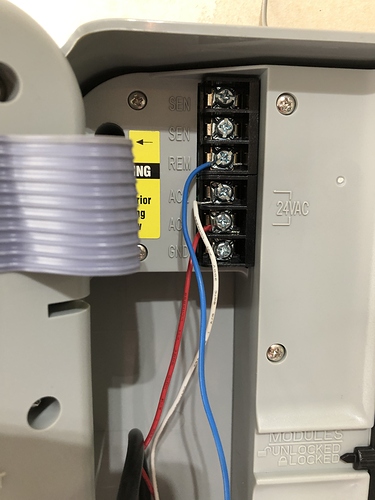 That’s a remote for your old controller.

Ok so I just need to cap those off? Any idea what the rumbling would be when the system starts up? I also lose a lot of water pressure inside my home ever since I installed Rachio. It was barely noticeable with the old unit but now the water inside will almost come to a halt.