The app should display the zone numbers as well as the zone names, everywhere that they appear.

Reason: My gardener doesn’t use the app; he operates the Rachio manually. Zone names mean nothing to him. When I tell him that there is a problem with the “Garden left of front door” zone, I need to say which numbered zone it is so that he can operate it from the Rachio.

I can figure out which zone it is by counting the icons in the Zones display. But really, it would be so much easier if the app showed the zone number, as in “(7) Garden left of front door”.

“Garden left of front door” should be easy to find.

Are you saying that he operates it from the Rachio itself? If so, maybe label the zones?
I am not saying I disagree with you though. Although I would probably rather see “Garden left of front door (7)” if it were done. Since I did my sprinklers, etc. I know exactly where everything is, but I can imagine me trying to explain some things to others. However, I probably would label the zones, put up a decoder ring, or something. Well, I can tell the zone number while in the app by counting.

In app.rach.io, you can turn on “show disabled” and you can see all 16 zones in order on one page, making it easy to know the zone numbers when you edit the names.

Yes, that is the obvious workaround, which I have employed. It just seemed odd that the zone numbers don’t appear anywhere in the UI, no matter how deeply you drill.

Oh, of course @Stewart. I do not know why I did not think of that (as I slapped my forehead).

As far as I know, the zones show up in the app sorted by their zone number. As in top left will be zone 1, top right zone 2, row below will be zones 3 and 4, etc… You can use “show disabled zones” option in order to make sure no zones got filtered out and do not show up in their place.

You are correct, but I don’t understand why. I would have said that the zones all appear on the page in Western reading order (left to right then top to bottom): 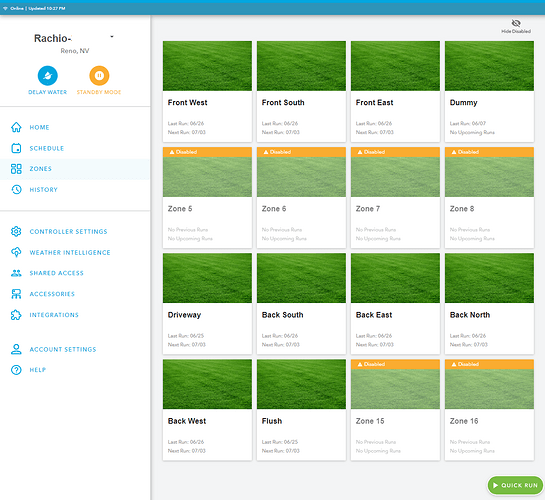 Desktop mode on the phones does not mean that resolution will necessarily be 1:1. Phone will usually scale the site so the text is not too small to read. Scaling impacts everything, not just text, thereby you are seeing fewer horizontal elements on the grid.
If you want to get an idea of how hard it would be to use desktop mode without scaling, try taking a photo of your computer screen and reading the text without zooming in.

I didn’t even realize that this was a problem as mine always shows the zone number. But then I went in and looked at my zone names (set them up several years ago) — And I did them as “1:front-left rotors”, “2:front s/w rotors”, etc. I must have noticed this way back then, and just made sure that they would show.

@Linn This is exactly how I’ve labeled my zones, except that add a space after the colon

I too renamed zones with the shortened zone number as a prefix (Zn1 Side Sprayheads, Zn2 Front Rotors, etc.).

It just seemed like the logical way to keep things organized from the get-go.

My wife had memorized the yard as zone numbers from the clunky old system, so my renaming helped maintain good communication and harmony.