When using the Rachio App in my iPhone running iOS 13.5 the App drain the battery like crazy. Some code optimization it’s needed in the App.

Some code optimization it’s needed in the App.

If it’s running in the background, that’s a bug that should be fixed, i.e. the bad code shouldn’t be executed at all. If it has high drain when displaying, that shouldn’t be significant; it would be rare to have it open for more than one minute. (If you’re out in the yard adjusting or cleaning heads, use Siri to control the device. If you’re configuring or troubleshooting schedules, use your desktop or laptop computer.)

If the functions you need are available on your iPhone at app.rach.io , just open that instead of the app.

How much in % has Rachio app used? 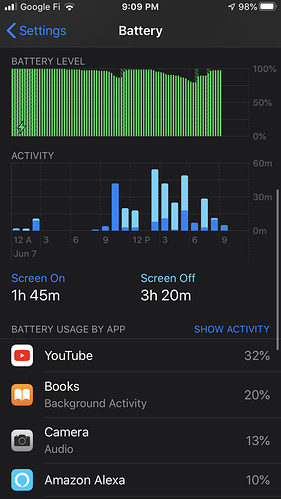 The issue it’s not that its running a process in the background its when the App is running. I was calibrating my zones and the App drained the battery like crazy, a lot more than watch a real-time video streaming. something its not right in the code or the way the App its doing the connection with the cloud / controller.

When using a phone outdoors, your screen brightness may have been much higher than usual / indoors. This is perhaps the biggest drain on the battery a phone may experience.

@Gene - it could be but if that is the reason, YouTube for example should drain the battery at similar rate right? I will do some testings and re-post results here with numbers

I was calibrating my zones …

Do you mean determining their precipitation rate? I would lay out some tuna cans, go back in the house and start a quick run, say 20 min./zone. After it’s over I’d measure the water level in each can. I likely would just use my desktop, but if I did it from the phone it would have been open less than a minute.

If you meant a different activity, please explain.

I have also experienced high battery usage when using Rachio on iphone, but it seems to only happen if I am editing schedules or zone advanced settings. I don’t recall exactly what triggers this battery drain, but the phone gets warm, and I’d need to kill the app. I have been using the app lately for checking soil moisture, or starting zones manually, and there hasn’t been any battery issues. But I wanted to add my voice to the battery issue that is triggered by either editing of advanced zone settings or schedules. It is not an issue with brightness (I was indoors and my brightness is at minimum). I was planning on reporting this issue once I had identified the trigger.

@moisture - That is exactly what I’m seeing. The phone gets very warm. Its definitely an App issue.