This is NOT Going to Work!

Okay, set my Flex Daily schedule, it’s supposed to start for the first time tomorrow. Giving it more time to complete, I have it set to complete watering at 9 AM. My normal (previous) watering schedule would start at 5 AM. Well, my new Rachio schedule is going to start, EVERY DAY, at 11:56 at night! Why? I guess because IF it watered for the entire week on one day, which everyone including Rachio knows it won’t, it takes 10:03 hours to water. Including a 2 hour drip irrigation. Tomorrow, it will quit watering a little after 4 AM. Checking other days, it stops between 4 and 7 hours BEFORE my 9 AM deadline.

With as smart as this thing is, it isn’t possible for it to start based on the total run time IT KNOWS AHEAD OF TIME, and start at an appropriate time to end at 9? So instead of starting at about midnight, it would start at 5AM to 7AM, and still complete by 9 AM?

I think I saw something about this in another post, but assumed Rachio would at least use the total time it would water for all zones AT ONE TIME. I doubt it would /ever/ water the full time for the week in one day, at least during a summer season.

I’m already working on work-arounds, while at the same time wondering why I should have to.

What you are addressing is a known shortcoming. Since you have drip irrigation, I would put that in a different schedule at a different time. I let my drip run starting at 9:30am in the morning since it doesn’t hurt to have that run during the day. Then just have your lawn finish up by 9am. In my case, I’m able to start mine lawn at 5:30am and even if it were to run all zones, it would finish before 8:30am.

Somewhere in the forum posts, Franz explained why it is so difficult for them to change this. He’s said many times that he wishes they had never done the “end before sunrise” option, I think because of this problem. Sounds like it is a pretty major rewrite to make this change.

Yes, I determined that one of the first things I should do is separate the Drip zone. But that still leaves over 8 hours for watering all zones.

I was EXTREMELY unhappy when looking at the results of my Flex Daily schedule. It just made no sense to me. But (as I’m an engineer) I had to investigate further: 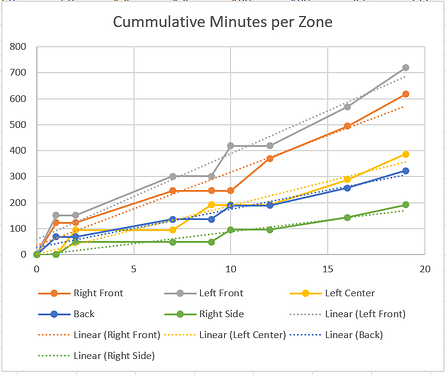