Large increase in moisture balance after a trace of rain

One of my zones that has shrubs showed a significant increase in moisture balance after just a trace of rain and no irrigation. There was .07 inches of rain and .06 evaporation but the moisture went from 1.09 (58%) to 1.1 (91%). What would cause such a dramatic increase in percentage from such a trace amount of rain? 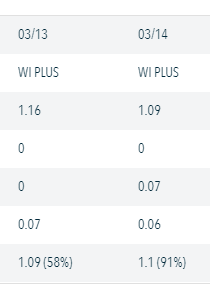 I agree, the percents look really screwy. Maybe post the whole week to show other values? Also, maybe just keep an eye on it.

Do you have a good weather station nearby? If you do, try switching to that to get rain values measured at that station instead of WI + predicted values. Real world empirically measured weather data from a nearby good/reliable station is always better. When you switch, go back to the soil moisture charts to see how the soil moisture changes with the measured and forecasted rain values.

I’m thinking perhaps you change the Soil Depth or Allowed Depletion or other value on 3/13 or 3/14? Doing that would not change the total water in the soil (inches) but WOULD change the percent that water is of the maximum. That’s the only scenario I can visualize that would cause it. I don’t think the rain amount caused it, nor do I think it’s caused by weather station selection.

There were no changes made yesterday, only today after I noticed the inconsistency.

I can’t explain it then. I’d just continue on, keep an eye on it, and see if it happens again.