Just got an irrigation system installed so I’m brand new to the world of irrigation as well as Rachio. I’m trying to get my settings dialed in as much as possible but the Flex Daily is recommending 12 hours of watering duration which seems quite crazy to me and wanted to check with the experts. I obtained my soil type (Sandy Loam) and AWC (0.14 in/in) from the Soil Survey website.

I have 12 zones (9 rotary zones, 1 spray head zone and 2 drip line zones…my drip lines are not part of my flex schedule). Most of my zones are in full sun with a few in some shade. I’ve left the crop coefficient at 80%, efficiency at 70% and adjusted my Nozzle Inches Per Hour down to 0.4 inches as I have Hunter PGP Ultra Blue 2.0 rotary nozzles

Can anyone see anything starkly wrong with my setup? It looks as though also some of the zones are running quite frequently in the calendar view, for example Zone 2 is set to run for 1hr 16 min on Fri 8/7, another 1hr 16 min on Mon 8/10 and again on Fri 8/14 for the same 1 hr 16 mins 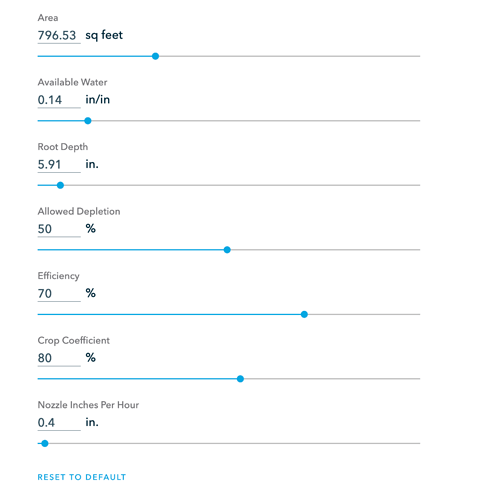 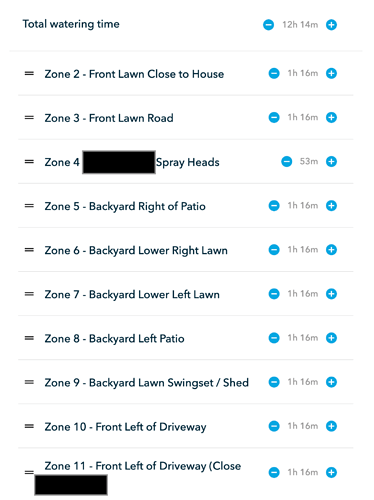 @jperman I suspect the Nozzle Inches Per Hour is set too low. The .4 you have selected is for the Hunter head. But you probably have multiple heads in each zone, so the question is how much water is being put down in the zone. The variable probably should be renamed to something like Zone Inches Per Hour. You can measure the actual water applied in 2 different ways. You can do a catch cup test. Or you can use your water meter.

Hmm I thought about that, that I have 5-6 heads per zone and if each puts out 0.4 then it should be multiplied higher but I didn’t see anyone on the boards doing that math so wasn’t positive that was right

Hmm I thought about that, that I have 5-6 heads per zone and if each puts out 0.4 then it should be multiplied higher but I didn’t see anyone on the boards doing that math so wasn’t positive that was right

It’s not right. As Alturia mentioned, it has less to do with the nozzle’s output than the water actually applied, on average, to the zone. Having just done 5 zones with catch cups, and ending up with very questionable results, I’d hate to do 11 of them. If there’s any way of measuring your square feet of each zone, I think you’d be better off with that.

Yes, it would be. And there’s a lot of time involved with setting up and recording everything too. I’d try the area method first. There’s a Google Maps Area Calculator Tool that might help.

Well there’s always the old fashioned way. Use a tape measure or pace it off. It still has to be easier than a catch cup test.

It’s not easy, true. The online version is a bit easier to control with a mouse. I’ve found that you can estimate the zones fairly well, even with (some) trees, but that will vary with lot of course. I still think that, plus some measurements, would get you in the ballpark.

I updated my root depth to 4" as my grass is super unhealthy and dried out at the moment so there is no way it is 6". I also re-checked my AWC and saw that should be 0.13 instead of 0.14. The watering duration now looks to be a more reasonable 7 hour 45 mins with a more reasonable distribution of days between my zones

If you did your layout right, every spot in the yard should be getting water from at least 2 different heads, according to everyone I’ve talked to. Ideally, its exactly 2, and not 3, but thats not real world. But figure out an average for this. Which should mean double the nozzle rate. So your nozzle rate of 2GPM (I think all PGP ultra are pressure regulated so that rate is constant and known).
The easiest way would be take the total area of a zone, draw it out and calculate the rectangles, triangnles, partial circles. Then divide by total GPM (2*number of heads).

The inches per hour calculations on spec sheets take into account overlapping heads. That’s why you have square shape and triangle shape.

Can you give me an example if we assume one zone is 400 sq ft? Sorry I’m a bit confused or should I just set my zones to 0.8 inches per hour (double the nozzle rate)?

@jperman You can set the Nozzle Inches Per hour in three different ways - your choice.

And if you choose option 1. above, you can usually just set it to what your spec sheet says. Here, for example, is the PGP spec sheet.

As I said above, the inches per hour accounts for overlap. So with a #4 blue nozzle, your inches per hour in a standard zone is going to be about half an inch. Do not double it.

Yes, that is what I am saying. The spec sheet does the math with the overlap and the area to determine the inches per hour across the zone. Understand too that the spec sheet is showing you the rate for 180 degrees. So if you have some that are 90 degrees, their flow is essentially doubled; 360, halved. Rotary heads just don’t put down a lot of water.

To gain some confidence and peace of mind, set up a catch cup test and let the zone in question run for a half hour or 15 minutes. Do it in the morning so you don’t end up with evaporation problems. That’s the best way to really know. But I’ve found that when I’ve done this on zones properly spaced, the results match the spec sheet. The differences come into play in the weird zones I have that are poorly spaced and have mixes of 90, 180, and 360 arcs.

Oh - and the difference you noticed is how the zone is laid out. Square or triangle. Check out this document and scroll to about page 44 if you want your mind to really unravel

Uyyy, not looking for more head spinning. I also noticed the “End before Sunrise” was ending like 2 hours before sunrise and then therefore starting super early like 2 AM. I just set it to start at a specific time (5 AM) as it will now run through until 7:30 or so given my zones don’t all run on the same day

Yea, mine also stops well before sunrise. Some long days are 5-6hours long and start at 1130pm!

As for the watering rates, the charts give you individual nozzle GPM, you have to calculate in/hr using the [actual] area of your coverage, and then consider overlapping heads. The other 2 numbers are for square and triangle configuration of heads, for those who don’t want to do math. But they assume you are running at specified pressure and radius.

As mentioned, if you really hate math but want to be sure, get some catch cups. The cheapest is any straight walled can, like a tuna/cat food can, but I suppose a large pan/cookie sheet would be pretty accurate too if measured level.

I use more of a tried and true process. I water the lawn until I start seeing mushrooms. Then I taper things off. Touch the grass an hour after watering. If it is dry, you will need more water. Dialing in the right settings will take a lot of time. Summer is the toughest to gauge with spring and autumn a lot easier. We are constantly watering throughout the day and we have several schedules to keep the lawn green. It is a lot of trial and error, but taking soil samples is not going to do a lot of good. My lawn is on an inch of soil and sand and rock beneath. We easily have the best lawn in the neighborhood. Trial and error and best of luck!

I, too, have low flow heads: Hunter MP Rotators (average about 0.4" / hour) with PRS bodies. During the hottest time of the year, it is over 12 hours as well. I thought that was crazy. I did a can test and got rather close to the same results as the performance data provided by Hunter. These type of heads work great for windy, hilly, clay, etc. and thereby saves water. I have had to keep reminding myself that it puts out quite a bit less water than the conventional spray heads at around 1.5" / hour. Last year was my first year and I started off quite well, then starved the grass of water which it went dark green then brown, and then revived it pretty well before winter. This year was close to the same, but not quite as bad. I did not start the heavier watering soon enough before it got hotter. We had some voles last year during spring and then a bunch this past winter. Trying to get them under control as well as they play havoc on the grass too. I might be painting a worse picture than what the neighbors comment as we really do have pretty nice lawn compared to most of the neighbors, but it is not perfect. I do like what @jbroady said about watering until mushrooms and then tapering off, etc.

I just noticed that now my flex daily is running so frequently, almost every day with the zones essentially running every other day. Why would that be the case? Shouldn’t it be doing a deep infrequent watering with flex daily?