I had an odd thing happen yesterday. My own personal weather station went offline for an unknown reason yesterday, and I received an email from Rachio saying it had found a closer station to me than my existing one (not mine, and about .8 miles away from me). My weather station disappeared as a choice from Rachio. I did NOT change my weather station on Rachio. Later in the day, my station again appeared in WeatherUnderground as online and I thought all was fine.

Then today, I got this email, asking me if I wanted to change my weather station since it had found one closer to me. I just double checked Rachio and I was still set on Rachio to my own weather station.

Did Rachio change it under the covers for me since mine disappeared for awhile? It’s very strange. 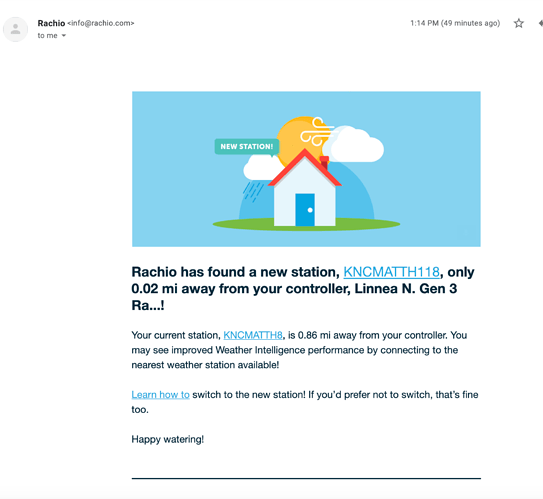 I had mine disappear from Rachio when it was offline, and Rachio used a different one. Probably the next closest one. Then, as you say, once mine was working again, Rachio offered to change it back. They can’t keep up with the rain with a non-functioning station, so makes sense they’d disconnect it.

This is Dane, Rachio CS Manager. I can confirm that Rachio will automatically switch your controller to the most local personal weather station in the event that your current station goes offline or stops reporting using a feature we call “Self Healing”.

When a station goes offline our weather service provider stops reporting it and it is removed from the list. This is why you saw it disappear from your Rachio app.

Thanks for getting back to me @dane! I really like that Rachio will automatically “Self Heal” but would it be possible on the home screen (at least on the web app) to correctly show what weather station you are using? When it did the self heal, it never changed to the new PWS that it selected, which was part of the reason I was confused. It always looked like I was still using the PWS that I had set (even though that PWS didn’t show as a selection anymore). I know that it doesn’t name the PWS on that screen, but it does show the distance, and that distance was always for the one at my house.